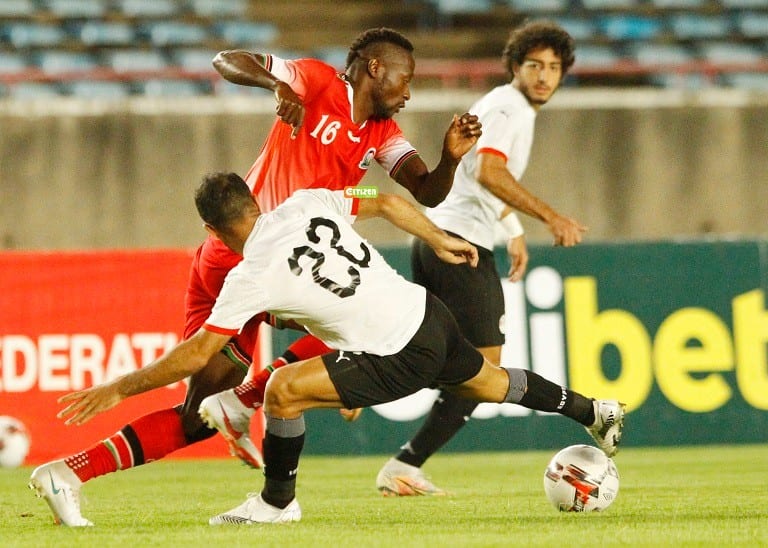 Mohammed Magdy was on target for the Pharaohs while Bandari FC man Abdallah Hassan scored Kenya’s equaliser, in his first start for the Stars in a Confederation of African Football (CAF) match.

The draw meant are mathematically unable to catch up with the Group G leaders Egypt and Comoros who thus sealed their tickets for the continental fiesta.

Comoros in an earlier kickoff in Moroni had held Togo in a barren draw and Stars needed to win Thursday’s match and hope Egypt loses to the former in their last qualifier in order to advance.

Kenya has four points, with only one round of matches to go, while Egypt and Comoros share the summit with nine each, before their Monday clash in Cairo.

Togo are last in the group, with only two, and will host Kenya in Lome on Monday in what will be an absolute dead rubber affair.

Egypt stormed into the game with such an urgency, just in the second minute Liverpool man Mohammed Salah snipping the ball into the box after shielding off Eric Ouma, and Mohammed Magdy excellently powered it on the right top corner for the opener.

In the seventh, captain Michael Olunga had a feeble attempt easily collected by custodian Mohammed El Shenawy before winning back-to-back corners, also well handled by the Al Ahly man between the sticks.

Although Stars were quite unsettled by the early goal, they were also quite hungry. In the 13th, Ouma outran his marker Ahmed El Sayed on the left and found Olunga in the box but his desperate connection under pressure from Hamdy Fathy went off target.

Olunga’s attempt three minutes later was aborted by El Shenawy having picked the ball from a long throw in by an impressive Daniel Sakari.

Kenya continued to command proceedings, and in the 23rd Hassan cut back from the right wing to find Anthony Akumu who connected powerfully, forcing El Shenawy to punch the ball back before finally holding onto it.

Just at the half hour mark, a corner was parried out by El Shenawy for a throw in, which was well executed by Sakari but the Pharaohs were alert to clear the danger as Olunga fought to finish off.

Masoud Juma had his first attempt in the box in the 37th, bending low to head the ball past El Shenawy but agonisingly over the bar.

Masoud would knock again at the Egyptians goal, just two minutes later, this time round calmly resting the ball on his chest amidst two markers before slotting it home only for the referee to rule it out, pointing out a handball just before the conversion.

Just after the restart, Olunga side netted from the left in the first effort of the second stanza, having been fed by Ouma.

Mostafa Mohammed Ahemed, the dreaded Galatasaray forward had his effort stopped by Stars goalkeeper Ian Otieno, who was forced to come off his line to thwart the danger.

However, the cleared ball fell on Magdy’s path, who instead of shooting immediately sought to find Salah in the middle of the box, only for him to shoot wide with the Zesco United custodian still reorganising himself.

Abuya had almost an immediate impact, but he shot over the bar from within the box although Olunga was waiting for his cross. 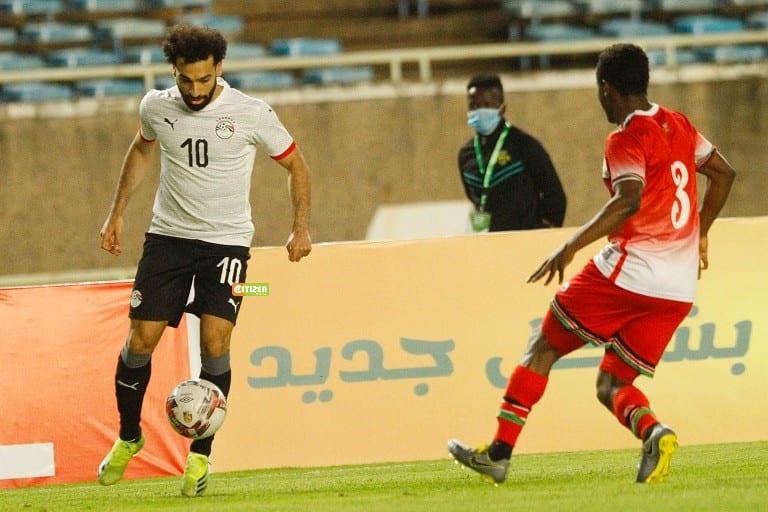 A corner into the Pharaohs box bore a melee, close ping-pongs in the forest of legs of both men in red and white ending with Hassan burying home the ball to restore parity.

Mulee then introduced Clifton Miheso and Cliff Nyakeya for Hassan and Masoud, as Stars piled pressure on the vistors who were however, so disciplined as they retreated to defend.

Olunga was fouled in the box and as he appealed for a penalty, a quick build-up to the other end was halted as an off the ball incident saw Wazito FC centre-back Johnstone Omurwa given his marching orders.

He was adjudged to have elbowed an opponent, reducing Mulee’s men to 10 just when the hunt for a winner was becoming realistic, and immediately the tempo slowed.

It was not clear immediately what triggered Omurwa’s reaction, and Nyakeya who was barely few minutes into the match was sacrificed as Mulee introduced Nahashon Alembi trying to correct the unprecedented mess.

It was clear the Pharaohs, who chose to rest Arsenal man Mohammed Elneny for the match, were not going to drop the guard as the clock ticked to fulltime much to the chagrin of the justifiably aggressive Stars, who are now not returning to AFCON next year.