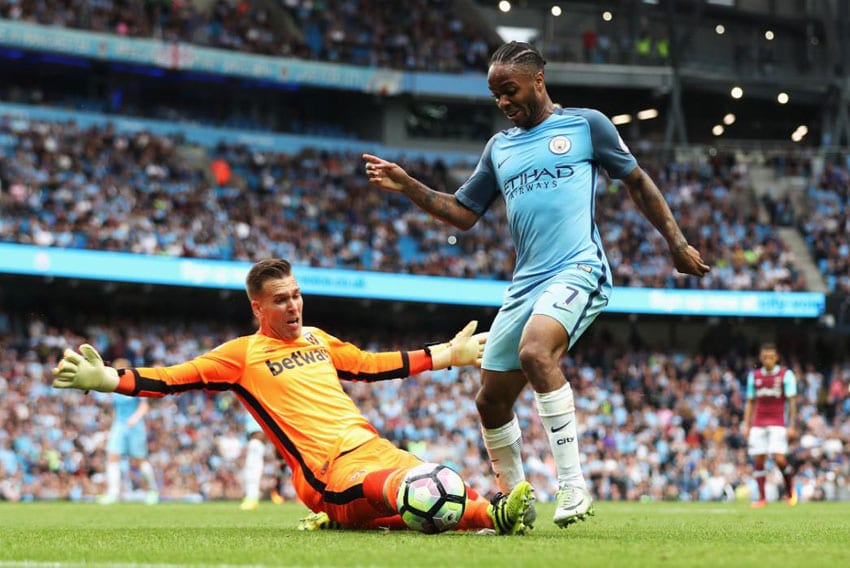 Raheem Sterling struck twice and Fernandinho added another goal as Manchester City made it five wins in as many matches under the management of Pep Guardiola with a 3-1 victory at home to West Ham in the Premier League on Sunday.

Guardiola’s men made hard work of seeing off the Hammers at Eastlands before securing a win that left City top of the Premier League, on goal difference from Chelsea and Manchester United, who’ve also won their opening three matches in English football’s top-flight.

Having raced into an early, two-goal lead, a second-half header from West Ham’s Michail Antonio ensured City endured an anxious final half hour, a fact reflected in manager Guardiola’s growing frustration in his technical area, before Sterling scored his second goal in injury-time.

City scored twice in the opening 18 minutes although twice as many goals would not have flattered the home team, such was their complete domination at that stage of West Ham.

Indeed, Sterling’s opening goal in the seventh minute came from the fifth noteworthy attack of the game, a sign of what was to come in that period for Slaven Bilic’s hapless Hammers.

The goal was magnificently worked, David Silva showing great agility in midfield, slipping the ball through for winger Nolito who picked out Sterling with a magnificent drag back, allowing the England man to finish confidently from 12 yards.

That was the culmination of a frantic attacking opening from City and, while the goal perhaps took some of the intensity out of the home side’s play, it only seemed a matter of when — not if — they would score again

Fernandinho had the answer in the 18th minute, rising unmarked to meet a Kevin De Bruyne free-kick and head past Adrian from seven yards.

De Bruyne also just cleared the bar by inches with another free-kick from the corner of the visitors’ area.

The injury toll that has plagued West Ham in the early season, particularly the absence of playmaker Dimitri Payet, was obviously keenly felt with Willy Caballero — once more replacing Joe Hart who was on City’s bench — a virtual spectator.

City’s next attack was stunning — De Bruyne to Nolito to Silva to De Bruyne — and should have brought a third goal as the Belgian’s shot was deflected behind for a corner.

After the restart, Nolito had the ball in the net only for the ‘goal’ to be ruled out for offside and the same player came close with a shot into the side netting after yet another dangerous De Bruyne free-kick was only half-cleared.

Sergio Aguero looked like he would claim a third goal, racing clear to round Adrian and seeing the linesman flag him offside, his frustration presumably growing moments later when Antonio handed West Ham an unexpected lifeline.

A 57th minute left-wing cross from Arthur Masuaka, who had been flirting with a red card after an early yellow, picked out his team-mate at the far post and, with Caballero unable to gather the ball, Antonio out-jumped Nicolas Otamendi and Gael Clichy to head in.

Aguero was becoming more of a factor in the second half, hitting the side netting with an effort before poking a shot which deflected off Sam Byram and needed to be saved by Adrian. Substitute Samir Nasri also saw a shot cleared off the line by Byram.

However, Aguero also appeared to throw an elbow at defender Winston Reid and, if judged to have been deliberate, may face retrospective punishment.

Sterling finally allowed City supporters, and his manager, to relax in injury-time when he collected Silva’s through ball, rounded the goalkeeper and rolled the ball over the line from a tight angle.