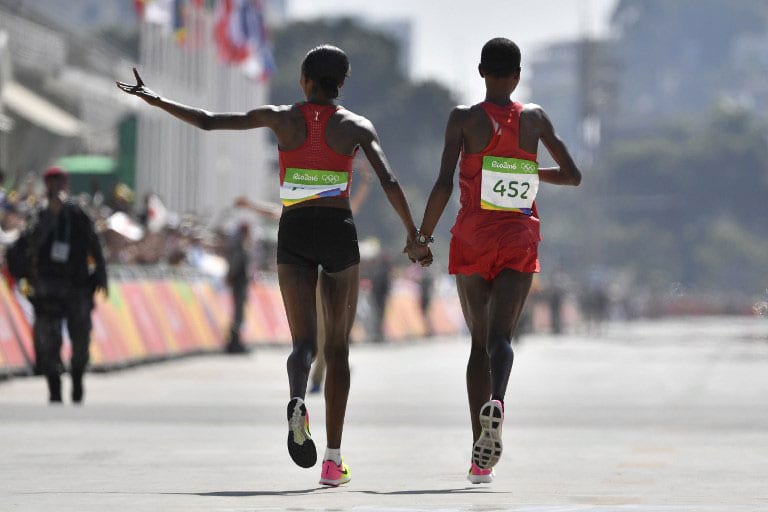 Ecstatic Jemimah Jelagat Sumgong chatted with her neighbour, Bahrain’s Eunice Kirwa before powering away from her in the final kilometre to make history as Kenya’s first ever women Olympics champion on Sunday.

While her compatriots back at home took to social media to scorn authorities for the high number of Kenyan born athletes running for other nations in Rio, including the women marathon that had no less than three running for Bahrain and Canada.

As they took on the Ethiopians and Belarusian in the lead, the only difference between Sumgong and Kirwa was the colour of their running vests since they live a stone-throw from each other in Kapsabet, Nandi County.

After the pre-race teamwork plan of the Kenyans fell apart from 20km in the punishing 29 degrees Rio heat when Paris Marathon winner, Visiline Jepkesho and later Beijing Worlds silver winner, Helah Kiprop fell off, Sumgong needed company at the front.

“When the other Kenyans were left behind, I did see her close to me, in fact we talked so much on the way but I couldn’t help her since she was running for another country, and I was running for Kenya.

“All I wanted was this gold for my fans back home,” Sumgong told Kenyan journalists in Brazil, proudly displaying her gold medal.

“I didn’t even know that I was going to win, and I didn’t want to look back, because I knew I had strong competitors from last year at the World Championship where I was number four.

“I only noticed they (Jepkesho and Kiprop) were left behind some few meters to the end,” Sumgong added flashing her dazzling smile.

Incidentally, her neighbour Kirwa edged her for the third medal at the Beijing Worlds before the finishing order was reversed in Brazil.

The women marathon saw 157 runners start the race from Sambodromo, before doing a three-lap 10-kilometre loop at the Botafogo Beach next to the famous, Copacabana and then returning to Sambodromo for the finish.

“From me, Kenyans, please know that I’m so happy to win this gold, this was my first Olympics, and I have won Kenya her first gold in the Women’s Marathon, this is all because of God,” the London Marathon champion enthused.

On several occasions protesters tried to disrupt the race towards the end, thanks to police intervention they all failed, but left the new champion scared.

“It brought the memories of London, but it made me be on standby just in case anything happened, thanks to the police they gave me confidence,” she said recalling an incident on her way to London victory in April where an intruder got to the course.

The 31 year-old has previously won the Rotterdam and Las Vegas marathons and her victory comes with a Ksh1.15m from the Government, Ksh1m for the gold and Ksh150,000 for taking part in Rio 2016.

Deputy President, William Ruto who is in Brazil for the Games was among those who poured lavish praise on the female marathon star who ended Kenya’s gold thirst at the Games.

The wait to interview Sumgong was long as she went through doping control but in the end, it was all worth it.