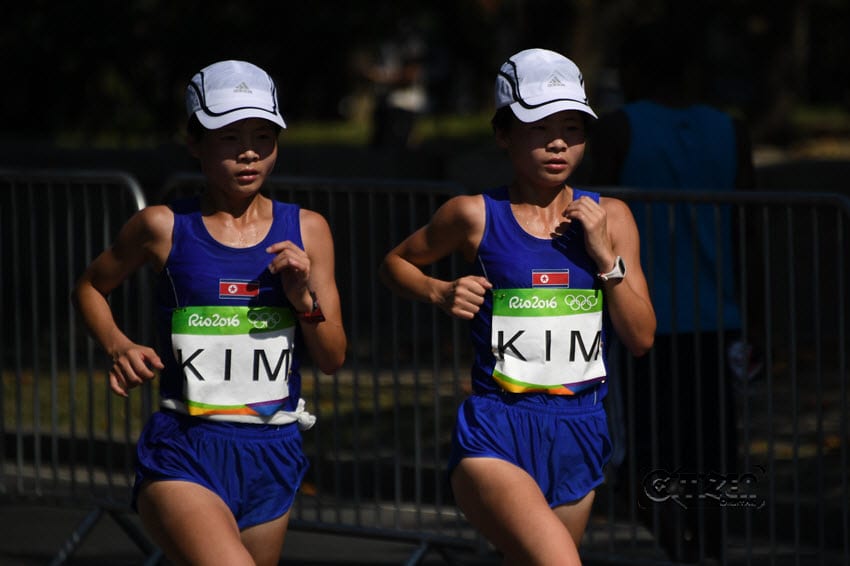 Jemimah Jelagat Sumgong made history on Sunday when she won the first gold medal for Kenya at the Rio 2016 Olympics and the first ever in the women’s marathon after edging a supreme battle over the last two kilometres with Bahraini’s Eunice Kirwa.

All Kenyan hopes seemed to evaporate when her compatriots Visiline Jepkesho and Beijing Worlds silver winner, Helah Kiprop, trailed off in the intense heat of the competition at the sun baked Brazilian commercial capital.

However, the London Marathon winner hang on to the lead before launching her attack for glory at the 39th kilometre in a three way fight for gold that also had Ethiopia’s Mare Dibaba in the mix.

As they approached the final kilometre, world champion Dibaba was cut off and with the finish approaching, Sumgong make the last surge for the title and arrived at the tape in 2:24:04 for the biggest win in her carrier.

Behind her, Kirwa who edged Sumgong for the bronze medal at last year’s Worlds in Beijing took silver in 2:24:13 as Dibaba closed the podium in 2:24:30.

Sumgong, 31, covered the second half of the race in 1:11:08 to scale the heights never before been reached by a female Kenyan marathoner, with Catherine ‘The Great’ Ndereba (2004 and 2008) who is in Rio as an official and Priscah Jeptoo (2012) bringing the country three silver medals from the ultimate distance race.

“I’m very grateful to win Kenya’s first gold medal in Rio. It was very hot but everybody had to get through the heat. I had to control my body and listen to my body very carefully.

“I was in Beijing but I was pretty disappointed that I wasn’t able to win a medal or make it on the podium, but I knew one time, one day, I would be somewhere,” she added. “I was never worried that I’d lose this. At the 40km I knew the gold was mine.

“I’m so happy, I feel extremely proud. I can’t even explain what I’m feeling,” she told the IAAF following her resounding achievement.

For the record, Jepkesho finished 86th (2:46:05) as Kiprop who missed the gold in Beijing by a second to Dibaba, never made it to the finish.

Organisers laid out a course that was to run 4km from the Sandromo through the streets of the city to a 10km loop along the bay that was run thrice before they returned for the finish by a longer route.

The bright Rio sunshine forced many marathoners to wear sunglasses and white caps or visors pulled down over their eyes, making them difficult to recognize without their bibs.

There were no such problems for the East Africans who wasted precious little time hitting the front with a few spectators lining the course, especially for such early going.

All the three Kenyans were visible in the lead pack with Jepkesho the most aggressive before Desiree Linden nee Davila of the USA took charge at 8km mark when they approached the Sugar Loaf mountain that marks the entry to the Rio harbour with the marathoners earlier running 17:23 for the 5km split.

The Ethiopians led by Mare Dibaba were clustered behind Linden, happy to let her do the work as the front pack started thinning.

At 10K, Jepkesho hit the lead and timed 34:22 with 13 in the lead pack, about five seconds back to the next runners. Ethiopia’s Tigist Tufa, Mare Dibaba and Tirfi Tsegay rounded the top four with Kenyan born Bahraini pair, Eunice Kirwa and Rose Jelimo just behind them.

London winner, Sumgong and Beijing silver winner, Kiprop were the next two across the split.

The Paris Marathon champion was still marginally ahead at the quarter way point as the Americans followed the line closely as the African pack wandered all over the road behind each other.

As they battled the Rio tarmac, spectators came out in the numbers with some footbridges along the way packed with people watching the race go under them.

Linden then shot back to rejoin the leaders now with Kirwa take charge at 15K with 51:43 followed by Jepkesho, Diba, Tufa, Kiprop, Kirwa and Japanese runner, Kayoko Fukushi in that order with two seconds separating the leader from seventh place.

The Africans then blew up the lead pack at the fluid station, the three Ethiopians three Kenyans and two Bahrainis out in front.

There was a light moment in the race when the Korean identical twins who have personal bests within a minute of each other confused commentators with the only thing distinguishing Hye-Song Kim and Hye-Gyong Kim being that one of them was wearing pink and the other blue shoes.

Then the first shocking development of the marathon came when the struggling figure of Ethiopia’s Tufa, the 2015 London champion started hobbling after seeming to have a cramp. She started walking and grabbing her right calf as her medal race ended.

At halfway arrived at 1:12:56 the ‘unfamiliar’ figure of Belarusian Volha Mazuronak the official leader with 13 in the lead pack with Tufa turned spectator.

Jepkesho was the next top contender to trail off, perhaps paying for her strong start in the heat as the leaders reduced to nine. Mazuronak, Tsegay, Dibaba, American duo Amy Cragg, Shalane Flanagan, Kirwa, Sumgong, Chelimo and Kiprop.

Bahrain’s Chelimo then took command at 25K in 1:26:07 with Dibaba, Tsegay, Mazuronak, Kirwa and Sumgong completing the top six who were credited with the same time and it was the Ethiopian world champion who led at 35K in 2:00:31.