The Big Interview: Milestone man Injera lays it all bare in intriguing tale 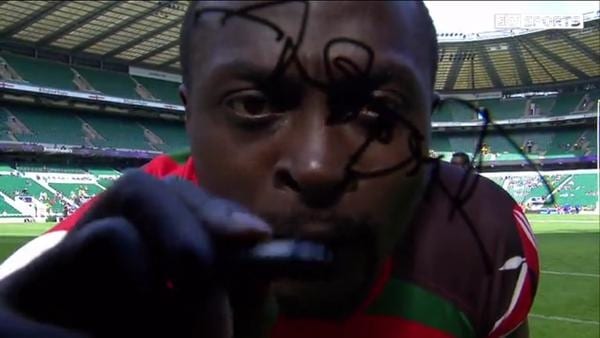 Writing about a man who has provided many with so much joy yet many know so little about becomes so tricky.

You see, this is a global superstar, a  fine rugby player who is revered across the globe for his impeccable skills and heroics on the rugby pitch.

Seeing him don the Kenya Sevens  jersey  showcasing his prowess on the rugby field coupled with impressive tries, powerful runs, and sensational assists, one cannot help but marvel at how Collins “Papa Lokole” Injera has made Kenyans proud over the years.

Born on October 18, 1986, Injera’s love for rugby started way back during his high school days at Vihiga Secondary School. 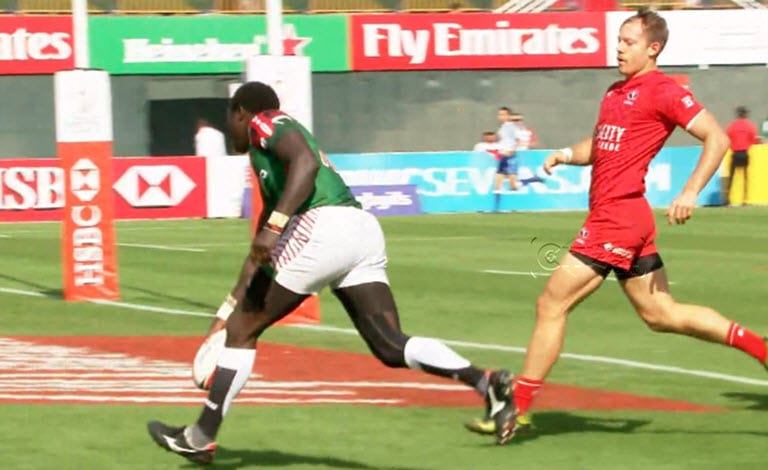 While most of his peers dropped the grueling sport to venture into other activities, Injera stuck with the game, the circumstances notwithstanding, a decision influenced and supported by his elder brother Humphrey Khayange, who was then turning out for Ulinzi RFC, one of the few existing rugby clubs back then.

However, fast forward, Ulinzi was disbanded and Injeras’s rugby journey and rise to stardom took a sudden halt, but as fate would have it, they both managed to enroll for Mwamba RFC,  a Nairobi based rugby club.

One of the senior players who introduced Injera to the game; both in Ulinzi and Kenya Sevens was Dennis “Iron-man” Mwanja, who at the time was enjoying his twilight years in the game .He held Injera’s hand and showed him the path after noticing the enormous potential he exhibited.

“Injera was one special player. Despite his young age at that time, you could still believe in him for a game changing opportunity.He was one of those special players who could  single-handedly win you a game; either with his own sniping breaks or by looping others into the much needed gap. A pocket dynamo,” Mwanja said.

At the time, Mwanja was Kenya’s all-time leading try scorer in the series with 58 touchdowns and with over 70 caps.He has since been overtaken by Injera, who has 265 tries under his belt.

Injera’s journey to the top was largely propelled by his drive as he set eyes on the newly formed Mwamba RFC and since then he’s never looked back.

“Kulabu has been a family to me since the day I knocked on their doors, and despite all the glory and highlights, I will forever be grateful to Mwamba RFC and its top management,” Injera told Citizen Digital with the humility of a lay-man as he reflected on his rugby journey.

He still plays for his local club Mwamba RFC to date and always grateful that”Kulabu” not only opened their doors but also gave him a solid foundation.

It did not take long at Kulabu before the then Shujaa player-coach Benjamin Ayimba noticed his talent and devastating speed, and with it came a call-up to the national team.

He quickly settled in and was on top of his game with many pundits predicting a great future for the lad.

“Not only a hard worker but does possess searing pace,vision in open space and classic style of play that has seen him become Kenya’s all time try scorer in the IRB Circuit, and also a devastating hand-off that often sends opposing tacklers tumbling.That, for me, in the shorter version is all one needs as a basis. I just love his energy in training, his chatting and enthusiasm is absolutely phenomenal, ” Peter Mutai, one of Kenya’s best ever scrum-half and who launched his career the same time as Injera said of his former team-mate.

Patience, hard work and resilience was all Injera needed in the game and thereafter he became a star, bagging his first top try scorer award in the 2008–2009 IRB Sevens World Series season after scoring 45 tries.

And for his heroics which have been aplenty, Injera has always exhibited the humility that is his second name, crediting his team mates for the accolades, garnered locally and in foreign capitals.

“First of all this is not an individual achievement but a team effort which we all work to achieve. Individually I think my work-rate is fairly good and a big part of any player coming through is footwork. People think footwork means sidestepping but it’s just being able to control your body and make small movements with your feet to help your positioning with tackle entry and at the ruck area; i’t’s the nuts and bolts of being a winger that I enjoy. I try to concentrate on doing the boring stuff very, very well,” Injera said, giving a glimpse into his game tactics that has seen him trouble the backs over the years, aided by his searing pace.

During the same year he scored 210 points and finished second behind Ben Gollings of England in the individual top points scorer table.

In the Singapore Sevens finals in 2016 against Fiji, Injera scored two lovely tries as he gushed about his role; pouncing on a grubber kick,  near chest frame horizontal to the ground, then sprang to his feet, spun out of a tackle from the Fijians and brushed off the fullback perfectly at the breakdown to score one of his two tries. Such dexterity is now a familiar sight in the Shujaa squad, with Injera often used as a link man.

His feat was however short lived when Dan Norton 285 tries  leapfrogged him to the top position but his success story will forever be written in the sports record and history books.

However, if Injera breaks the all-time try-scoring record again anytime soon in the remaining legs, one wouldn’t blame the TV camera operators for taking a step back.

The last time he made a significant milestone, he celebrated by ruining a camera lens worth  ($85,000), Sh 8.5million by taking out a permanent marker from his playing socks and signing the lens, sparking excitement and controversy  in equal measure across the rugby world.

Besides the 200 try mark milestone, the mercurial speedster, back at home, enjoys much respect that has seen aspiring rugby players look up to him.

Through his mind-blowing-scoring record and world class performances in international rugby games, Injera  has won the Kenyan Sportsman of the Year Award in 2009, and also played for the Kenya National Rugby Union 15s team at the 2011 World Cup qualifiers.

With his performances assured, Injera, naturally, is a motivating factor to the team and his presence in the rugby game yields positivism for Shujaa.

“I think there’s a lot of growth in my game; in defence especially– finding a good time to go in for a poach and when to get up and add width. As a back, you grow in skill and fitness levels day by day and I want to try to take more ownership of that and maintain the consistency. I need to keep working hard till the last day,” Injera added.

In the just concluded Commonwealth Games, he made 18 carries, 20 tackles and 3 turnovers. There is no gainsaying that his energy has helped prop up a Shujaa team that has carried a few passengers on board of late. 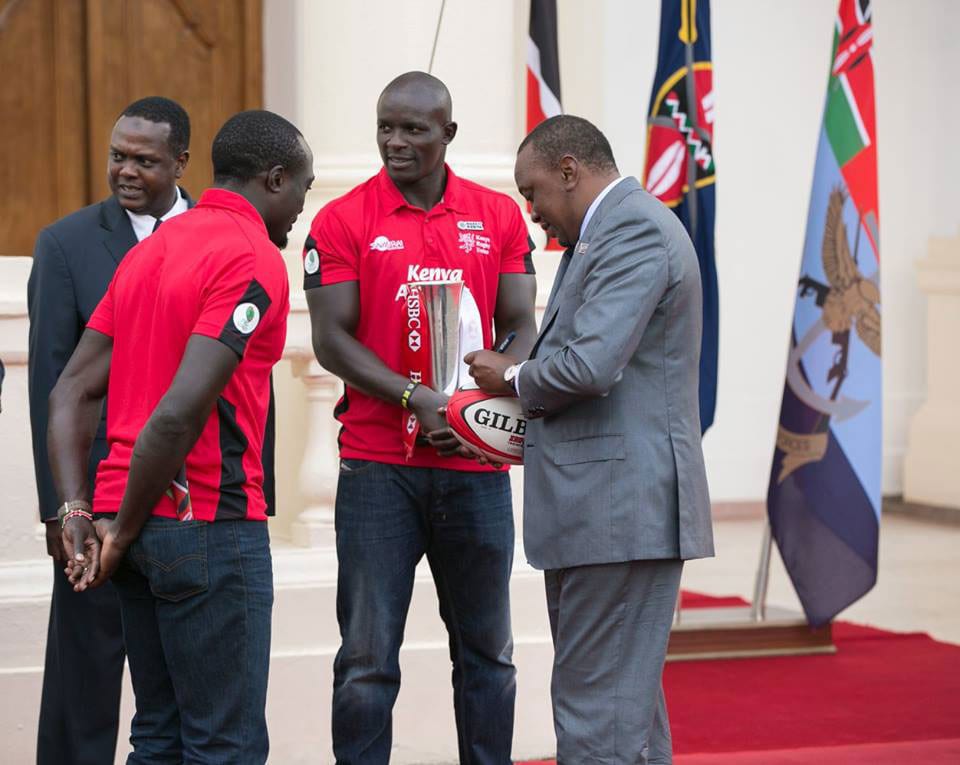 His prowess and style of play never ceases to amaze despite numerous injury scare but he has always come back stronger, earning him international recognition and brought so much pride to the country.These heroics so him  awarded the Presidential Order of Golden Warriors (OGW) alongside his brother Humphrey Kayange, for their performance in the 2008–09 IRB Sevens World Series.

But unknown to many, Injera was offered a deal in South Africa to play for Western Province but turned it down to focus on helping the national team achieve its desired goals in the Sevens Series Circuit.

His dedication to the game has seen him earn respect from rugby’s rank and file .

Quite the remarkable sportsman and rich story he has,   Injera is a family man; married to Chebet Limo with whom they are blessed with two lovely kids. 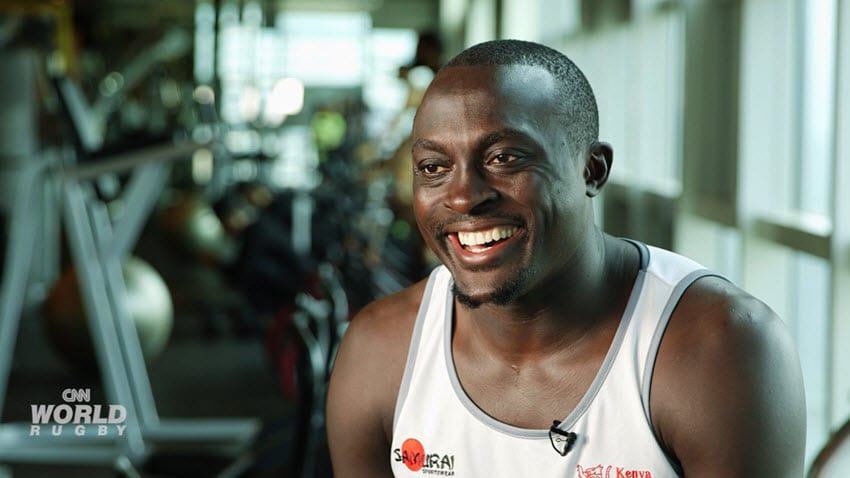 Despite the fame and the responsibilities on his shoulders, Injera seems to abide by the philosophy, “to whom much is given much is expected”.  Besides his on-the- pitch successes, he leads a humble, shy and quiet life; a true gentleman and sportsman.

With only three legs left to the conclusion of the 2017/2018 HSBC Sevens Series, the questions that linger in the minds of many loyal Kenyan fans is whether Injera will still retire after a glittering career.

“For now I love what I am doing and that’s where my main focus is .I feel I am in good shape and only time will dictate the transition ,”Injera said.

He also made it to the top try scorer board in the just concluded Singapore Sevens with four tries; attaining 20 points and his coach Innocent Simiyu was full of praise.

“He is one of the best sevens players in the world and having him in top form is quite a benefit to the team,” Simiyu added. 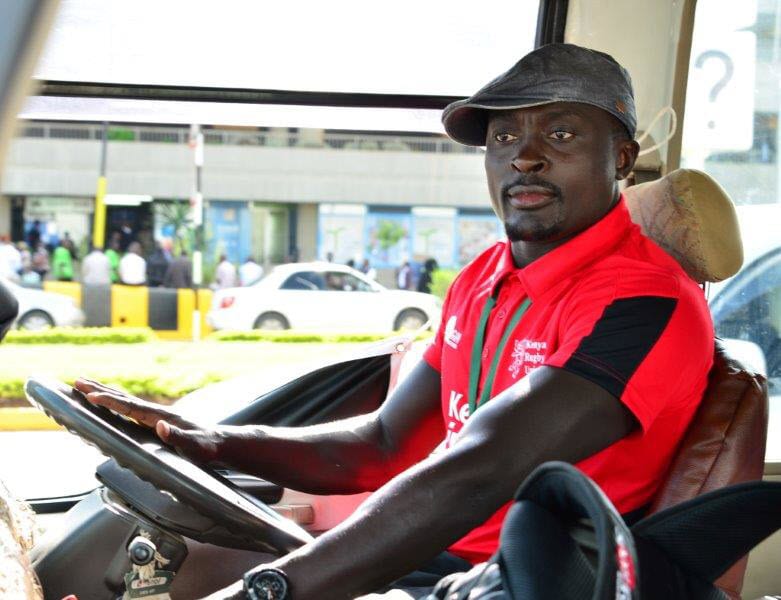 With time ticking on Injeras career he has made a name as a pacy winger and one of the fastest players in the game, but off the pitch, he is arguably one of the most humble rugby personalities, gifted with a natural sense of humour and easily blends with fans.