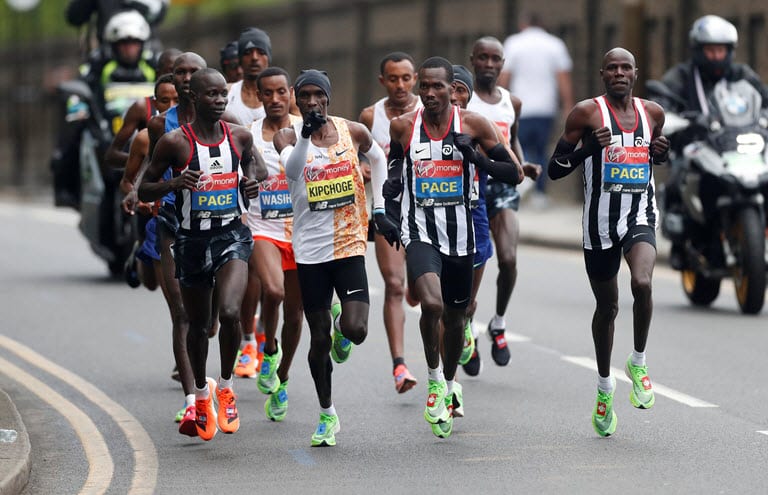 The greatest marathoner of all-time Eliud Kipchoge breezed to yet another victory, winning the London Marathon men title for a fourth time clocking 2:02:38 to inscribe his name in the athletics books. Kipchoge — who smashed the world record by over a minute when winning the Berlin Marathon last year with a time of two hours, one minute and 39 seconds — strode clear of the field to win with the second fastest ever marathon time of 2:02:37. Having ran the first kilometre at world record pace out in front, Kipchoge clocked an identical 10km time as he did when breaking the world record in Berlin, before coming through the halfway point at 01:01:37. Ethiopian duo Mosinet Geremew and Mule Wasihun kept up with Kipchoge, but the Kenyan pulled clear in the last two miles, winning with a course-record time, ahead of Geremew and Wasihun. Farah, multi-Olympic, world and European champion over 10,000 and 5,000 metres, finished fifth, with a time outside his personal best. In the women category, Brigid Kosgei bagged the honours after stopping the timer in 2: 18:20 hrs ahead of Vivian Cheruiyot who came second in 2:20:14. The Sunday race, the 39th edition of the London Marathon, was Kipchoge first race since breaking the marathon world record seven months ago, at the Berlin Marathon where he clocked in 2hrs 1 minute and 39 seconds. 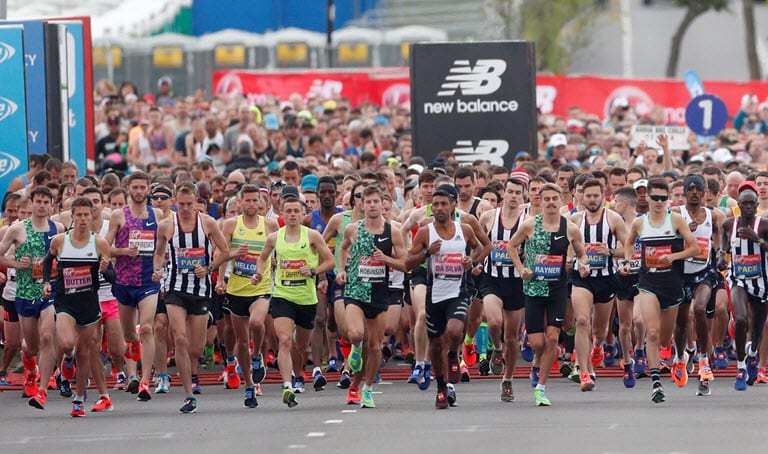 The victories by Kipchoge and Kosgei made Kenyans burst into celebrations. From Nairobi to Eldoret where hundreds thronged entertainment joints to watch the race, congratulatory messages came thick and fast with Deputy President William Ruto leading the cue. Writing on Twitter, Ruto hailed Kipchoge for an ‘energetic, dominant and electrifying’ performance, while hailing Brigid, who triumphed in the women’s race for an ‘exhilarating’ run.

Congratulations to @EliudKipchoge for an energetic, dominant and electrifying display to win the #LondonMarathon and cementing his status as one of the greatest marathoners of all time. We savour a fantastic victory. pic.twitter.com/zYsCCgGqxY — William Samoei Ruto, PhD (@WilliamsRuto) April 28, 2019

Geremew clocked 2:02:55 to become only the third runner in history to with a sub-2:03 after Dennis Kimetto and Kipchoge with Wasihun coming third in 2:03:16. Shura Kitata, who was part of the Ethiopian trio that stayed relentlessly with Kipchoge’s pace, finished fourth with Mo Farah coming in a disappointing fifth with his build-up overshadowed by a brutal war of words with Ethiopian great Haile Gebrselassie. Kipchoge surge on for the lead, giving pacemakers a run for their early on with little concern for his opposition while Farah who had declared full intent of going for the victory sat at the back of the pack, in the fashion he likes to run on the track. Brigid Kosgei left little doubt she would go a spot better than she did last year with a superb finish as claimed the 2019 London Marathon in dominant fashion on Sunday. Running in a deep field billed as the greatest line-up ever put together, Kosgei completely took apart her opposition as she uncorked a personal best 2:18:20 for the victory. It completed a phenomenal 12 months for the 24-year-old with her maiden win at the English capital coming just five months after her Chicago Marathon success. Vivian Cheruiyot, the defending champion, clocked 2:20:14 for second after having tables turned on her with Ethiopian Roza Dereje completing the podium places in 2:20:51. 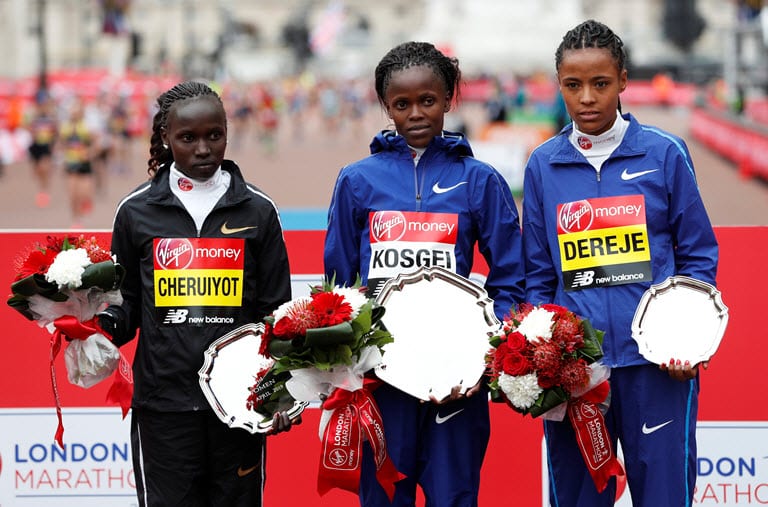 Australian Sinead Diver led the pack through to 25k in what was an incredible effort from the 42-year-old Australian but it was all Cheruiyot and Kosgei from beyond that point as the Kenyan pair tussled for the lead. Kosgei proved the braver of the two, stretching Cheruiyot and inviting her to up the pace with the world ranked number 2 only affording one taste of the lead after a wobble. Kosgei put a frantic pace just after 35K and it seemed to have broken her compatriot. She approached the final mile with it all to herself, staring down comfortably at the home run before powering home through the final 400m for the crown.