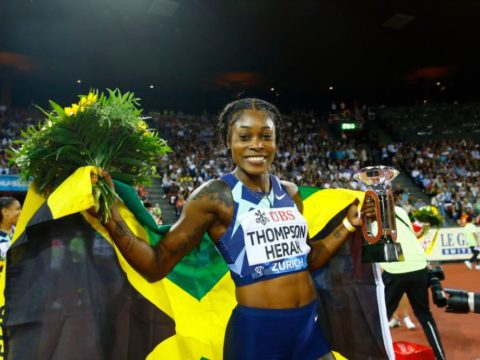 Jamaica’s Elaine Thompson-Herah finished off her golden year on a high when she won the 100 metres title in the season-ending Diamond League final in Zurich on Thursday.

Thompson-Herah followed up her Olympic 100 and 200 metres double in Tokyo by coming within 0.05 seconds of Florence Griffith Joyner’s 33-year-old 100 metres world record in a Diamond League meeting two weeks ago.

Although she was unable to better the record in the season finale, Thompson-Herah took the title in a time of 10.65 seconds ahead of Briton Dina Asher-Smith.

“I am very happy with my race,” Thompson-Herah told reporters. “It’s good to add a Diamond League trophy to my collection, it has been a long season so I was just happy to cross the line healthy.”

Kenya’s 1500m Olympic champion Faith Kipyegon held on in an epic final straight sprint to beat Ethiopian-born Dutch runner Sifan Hassan, who had taken bronze in the event in Tokyo along with two golds in an unprecedented treble.

Timothy Cheruiyot made sure of a Kenyan double after holding on to pip Jakob Ingebrigtsen of Norway in a winning time of 3:31.37 to reverse their 1-2 positions in Tokyo.

In the absence of Olympic champion Lamont Marcell Jacobs, who announced last month he would not race again this season, American Fred Kerley, who finished second to the Italian in Tokyo, won the Diamond League men’s 100 metres title with a time of 9.87 seconds.

In the field, Russian Anzhelika Sidorova became only the third woman in pole vault history to clear five metres, with her height of 5.01 metres just short of the world record of 5.06 set in the same stadium by Yelena Isinbayeva in 2009.

Sidorova’s effort was a Diamond League record, second on the world outdoor all-time list and the best clearance outdoors since Isinbayeva’s record was set 12 years ago.

Mondo Duplantis attempted to better his own world record of 6.18m after winning the men’s event with ease, but despite the fevered backing of the 20,000 crowd, the Swede failed to set a new mark.

Norway’s Karsten Warholm, the Olympic champion and world record holder, was a comfortable winner of the men’s 400 metres hurdles in a modest time of 47.35. The women’s title was taken by Femke Bol of the Netherlands.

Namibian Christine Mboma won the women’s 200 metres, claiming victory in an Under-20 world record time of 21.78 to suggest she can add to her silver medal in Tokyo.

Joint Olympic champion Gianmarco Tamberi claimed the high jump title after clearing 2.34m, proving one of the most popular athletes on the night as he stirred the crowd into a frenzy and celebrated his success with typical gusto.

There were 25 final winners, with each champion collecting US$30,000 – half the prize in 2019 – and automatic entry into next year’s world championships in Eugene in the United States.