Otieno has been enjoying a fine form, that has elevated him to second on the best scorers chart so far, just two goals shy of John Mark Makwatta, who has since exited KPL to join Zambia’s Zesco United.

Otieno’s goal was all Tusker needed to silence AFC Leopards 1-0 at the Afraha Stadium in Nakuru, a goal he says was important as he strives to sustain his scoring mojo going forward.

“There is some enthusiasm that grows in a player when you score such important goals. You feel psyched for the next assignment, which is important both for the player and the team.

“I have always wanted the Golden Boot, and I feel it is possible this season because I’m enjoying good form now. There is quite a race to run ahead but I want to keep scoring, which I believe is possible.”

Otieno, who has previously featured for champions Gor Mahia and Posta Rangers, albeit in a coy style revealed his thirst to play outside Kenya.

“I also want the experience of foreign leagues. If I can keep scoring that is a good signal towards fulfillment of that desire. For now I’m committed here (at Tusker), I can’t speak much of a possible transfer, but that is my ultimate dream,” answered a smiling Otieno, when pressed to divulge if a deal to vacate Ruaraka was cooking. 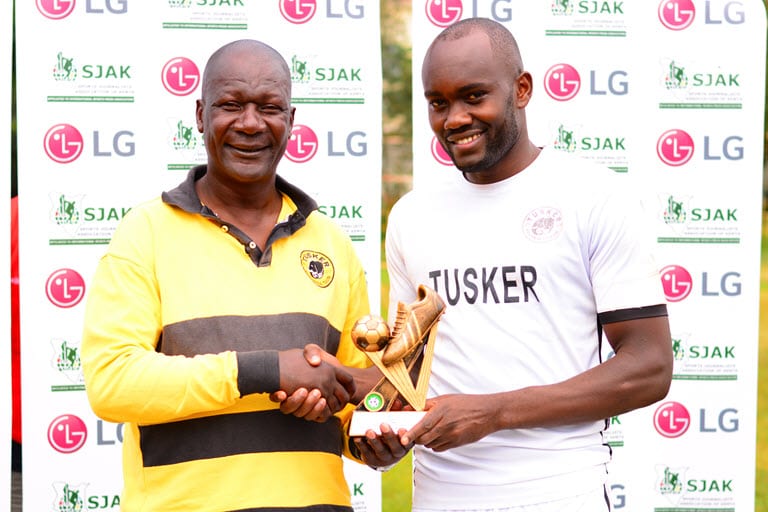 Five of his goals in the current campaign came in November last year, his exploits earning him the Sports Journalist Association of Kenya (SJAK) award for the month.

Besides, following the November exploits, he got a nod into the national team for the first time, forming Francis Kimanzi’s squad to the 2019 CECAFA Senior Challenge in Kampala.

“A good player needs a good team to perform exceptionally, and my teammates are also doing great, which is pushing me further in my goals hunt,” Otieno.

Enoch Agwanda of KCB and Enosh Ochieng are the other players breathing on Otieno’s heels in the Golden Boot race so far, with 10 and eight goals respectively.