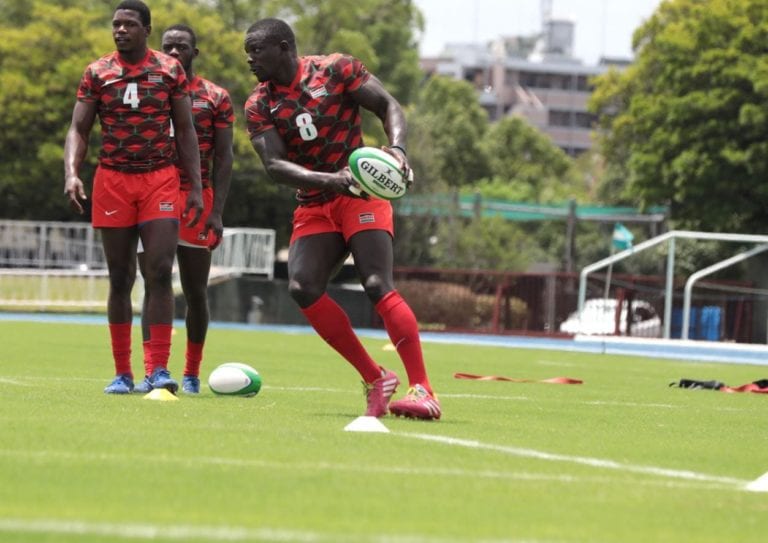 Kenya sevens rugby team, Shujaa saw their hopes of a podium finish go up in smoke after a 12-7 loss to Ireland in their last group game at the 2020 Olympics Tuesday morning.

Prior to the loss against Ireland, Shujaa had earlier lost 19-14 to the USA and 14-5 to South Africa to finish bottom of Pool C.

This was first appearance for Ireland at the Olympics, but were unfortunate for not qualifying for the quarters after Kenya lost 14-5 to South Africa in their second game of the day.

However that did not deter the Irishmen from putting up a show against a resilient but unlucky Shujaa side.

Hugo Lennox and McNulty Harry were on target for Ireland in the first half with Jordan Conroy adding the extras for a convincing 12-0 lead heading to the intervals.

Both teams produced a resilient show in the second half with Kenya proving a tough nut to crack having worked on their defensive errors but no team was able to go past the try line.

Shujaa speedster Collins Injera would use his vast experience in the game as he muscled past the Irishmen to offload the ball to a charging Vincent Onyala who scored a converted try for 12-7 score.

However the consolation try was not enough for Shujaa to stage a comeback, Ireland taking the honours and their first win at the Olympics with Shujaa shifting their much needed energy on placement matches.

The placement matches will determine the final position Shujaa will occupy during this year’s Olympics with the men’s rugby shifting focus to the Cup quarters.

The Innocent Simiyu charges are scheduled to meet Japan at 11:00 am EAT as they seek to record their first win in the global event.