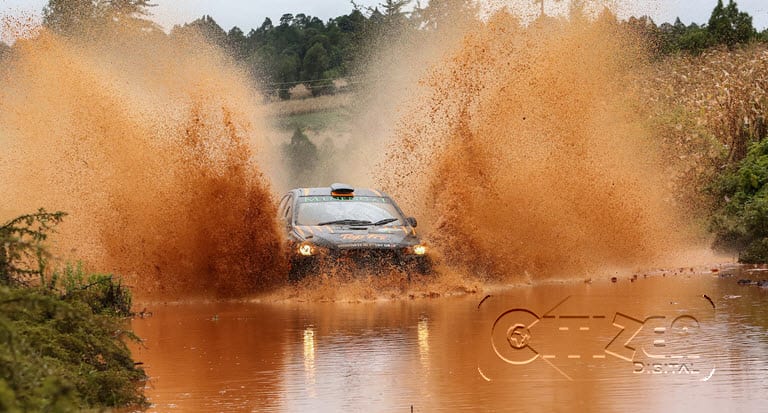 Carl “Flash” Tundo and his partner Tim Jessop retained the KCB Eldoret Rally in extremely muddy conditions to take the 2019 Kenya National Rally Championship title race down to the wire.

Tundo savoured his second victory of the season in his R4 Mitsubishi Lancer Evo10 beating leader Baldev Chager to second spot as Onkar Rai in a VW Polo completed the podium dash.

Tundo beat Chager by a massive 10:08 minutes after the latter suffered gearbox gremlins on the very last stage of the Western Kenya Motor Club organized round

Tundo’s victory in the high altitude terrain now hands him a slim chance for his title defence as Chager now needs a top ten finish on the belated Guru Nanak on to recapture the title he lost a few years ago.

Issa Amwari piloting a Mitsubishi Lancer Evo10 celebrated a career best fourth performance in an event which saw several cars stuck in the muddy Salabin Stage whose second run was cancelled due to muddy conditions.

Among those who got stuck in the adverse conditions were Eric Bengi, McRae Kimathi, Ammar Haq, Nikhil Sachania and Minesh Rathod.

Karan Patel also withdrew from the rally in the early morning run.

Carl was all smiles after victory and this is what he had to say st Iten service: “I am very happy for the good result. I prayed for the heavens to open but not as much rain as we witnessed in Eldoret this year. The stages were fun to drive, all in all a good day at the office. We are still in the hunt for the Championship though with an outside chance.”

Baldev’s navigator Ravi Soni described the conditions in Iten as tough and said: “We still lead the Championship which is the most important thing for now. We kind of enjoyed the conditions as they were different and very challenging as compared to other rallies. Being first on the road we were kind of skeptical about how it would pan out as we have never done a rally with such conditions. We maintained speed in the conditions and won the first two stages. Unfortunately, on the very last stage we were compelled to drive on first gear which cost us a lot of time.”

Onkar who alongside Chager will be proceeding to the East African Safari Classic Rally confirmed his availability for Guru Nanak.

“I have never been a fun of the wet. So we tried as hard to be good but Boldy (Chager) and Flash proved quite fast. We will enter the Guru Nanak and be back for the Championship next season. We hope to give Chager and Tundo a run for the money,” said Onkar.

With one round to spare, Chager has stretched his lead to 162 points against Tundo’s 142.

Guru Nanak Rally will decide the Championship on December 15.