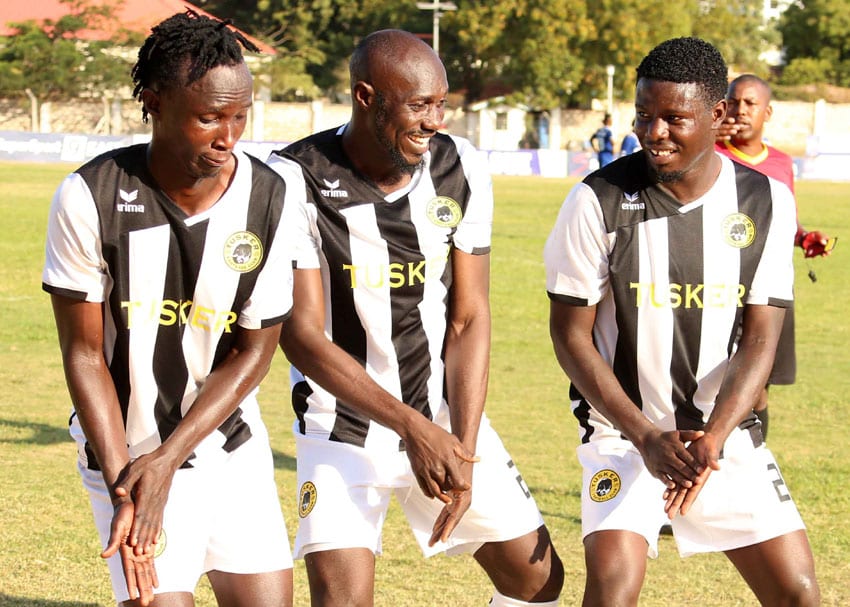 The 2012 champions won their testing weekend clash against Bandari FC thanks to a late goal from Stephen Owusu to open up a seven point gap over the defending champions who have held on to the crown since the Brewers last lifted it.

Paul Nkata will lead the KPL leaders who are on 51 points against relegation threatened Nairobi City Stars before travelling to Awendo to face mid table Sony Sugar in perhaps their most challenging trip outside Nairobi.

Tusker will then face struggling AFC Leopards who have only pride to play for in their penultimate clash before rounding their league assignment on November 19 against K’Ogalo.

Wins in their next three games will see them crowned champions with a game to spare assuming the top two do not slip up between now and the final weekend with Ugandan Nkata preaching calm as he prepares to brew a concoction strong enough to clinch the crown.

“It’s too early to celebrate. With four games to go anything can happen and we choose to focus on our next game against City Stars and target the three points against a very tricky side,” the veteran campaigner said.

While Tusker are on the ascendancy after picking a rich vein of form since Gor (44) reeled back their seven-point advantage to two just before the international break, K’Ogalo are reeling from a 1-0 Top 8 upset against Muhoroni Youth on Sunday.

The match that ended in chaos saw the Green Army’s vent their frustrations with the inability of their team to convert territorial advantage to handsome victories ramped up the pressure on Jose Marcelo ‘Ze Maria’ Ferreira and his boys to deliver victory on Wednesday against Stima.

Mighty K’Ogalo who stretched their league record to 15 last season when they three-peated have not found the back of the net in the last three fixtures, with the damaging barren stalemate against basement side Sofapaka quickly followed by the meek surrender of their Top 8 crown.

Former Brazilian international, Ze Maria, has called on his side to more clinical in front of goal after their Rwandese striking duo of Ksh4m star, Jacques Tuyisenge and Meddie Kagere failed to spark in their last two games despite creating enough opportunities to run cricket scores.

“Our strikers need to be calmer in front of the goal. We have wasted a lot of chances the previous games and it is time to start capitalizing on them,” the Brazilian who is feeling hot under the collar in the volatile K’Ogalo coaching hot seat offered.

Next up for the champions is a date with the eternal enemy, Leopards on Sunday where the form book is usually tossed out through the window and Tusker will be watching with glee should the team that swept all before them last season buckles under the weight of expectation.

With the deadly foursome of Kagere, Michael Olunga, Ali Abondo and Khalid Aucho that powered K’Ogalo to the unbeaten campaign was finally broken up by the start of the second leg of season when the Ugandan midfielder left, Gor have lacked a source of inspiration to dig them out of holes in the business end of the campaign.

In March, Leopards brought K’Ogalo’s unbeaten KPL run to a bitter end in a 1-0 victory that saw the end of Scotsman, Frank Nutall at the helm having led them to the record-breaking 2015 title stroll.

Leopards officials announced over the weekend their new coach would be in place before the Mashemeji (In Laws) Derby in what is seen as an effort to rally the 12th-placed side for an end season flourish after a nightmare campaign.

While the title chase has boiled down into a two horse race, City Stars on 17 points and 2009 champions Sofapaka who have one less are fighting to stage the great escape and salvage their top flight status having lost the weekend matches against Thika United and Sony.

Placed just above the relegation zone Ushuru FC (24) need two wins to seal the fate of the bottom two since they can only gain a maximum of 29 and 28 points.

Anyone from third placed Chemelil Sugar (42) and seventh-placed Posta Rangers (38) can win the title of leading the challengers’ home after the battle for the top-two is settled.

Stima (40), Mathare United (39) and Ulinzi Stars (38) in sixth are the other teams in the running to claim a third finish and with prize money distributed to correspond to the final order at the end of the season, there is still a lot to play for.

Kakamega Homeboyz (35) are barely hanging on to eighth with the sides immediately below them, Sony (35), freshly-minted Muhoroni (34) and Bandari (31) still in with the chance to qualify for next season’s knockout tournament where the winner collects Ksh1m.

In a Facebook post, Muhoroni announced they would donate Ksh250,000 of their prize money from Sunday’s stunning victory over K’Ogalo to charity.

“Our first stop after bagging the KPL TOP 8 Trophy was at the Achego Children’s Home. We promised them the trophy and it was noble we savour this moment with them. The team will donate a quarter of its Top 8 Proceedings to orphanages around the Muhoroni Town #Muho,” the team wrote on their official page.