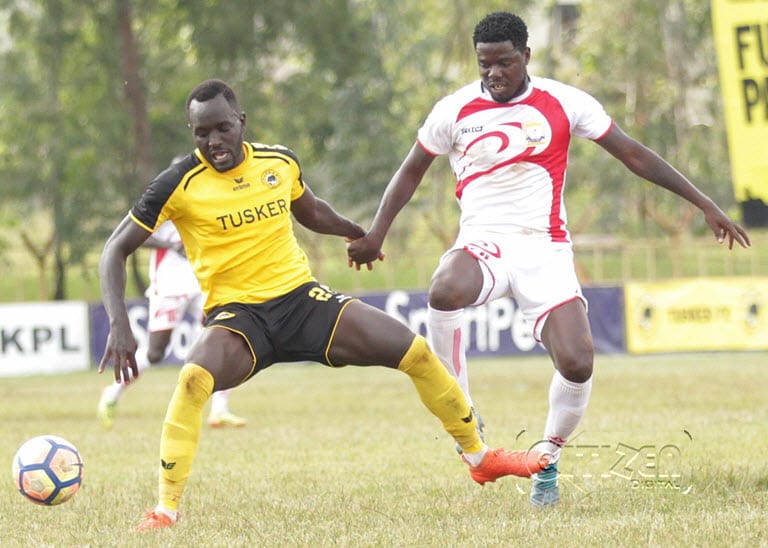 Former Tusker FC striker Allan Wanga returned to haunt his former employer, scoring a goal as Kakamega Homeboyz overcame the brerwrs 2-0 in a physical battle at a sloppy Ruaraka grounds in Nairobi

Wanga put in a diving header in the 86th minute to double the lead and help Homeboyz assume all the three points, as the brewers succumbed to a second defeat on the bounce.

Estone Esiye opened the scoring in the 27th minute with a powerful shot driven from a set piece to give the Mike Mururi coached side the lead.

The no nonsense Tusker tactician Robert Matano was very vocal on the touchline as his team fought to salvage at least a point but to no avail.

Boniface Muchiri came close for the hosts from a free-kick just minutes after conceding but his effort went wide of Michael Wanyika’s post which was the case for the better part of the game.

Allan Wanga got himself into good positions as he caused endless headaches to his former side with a few touches and shots in and around the brewers’ box.

Jackson Macharia and Robert Achema were Matano’s second half substitutes as he looked to salvage a point from the game, but his tactics simply didn’t work out as Homeboyz defended resolutely.

Homeboyz enjoyed lots of possession in the second half as they comfortably passed the ball around.

Wanga continued to cause havoc on the brewers’ defence coming close on a couple of occasions with an overhead kick early on in the first half and his efforts were rewarded in the 86th minute.

Elsewhere, Sony Sugar got the better of Chemelil Sugar in Chemelil as Stephen Ouma curled in a beautiful free kick at the death to hand the visitors all the three points .