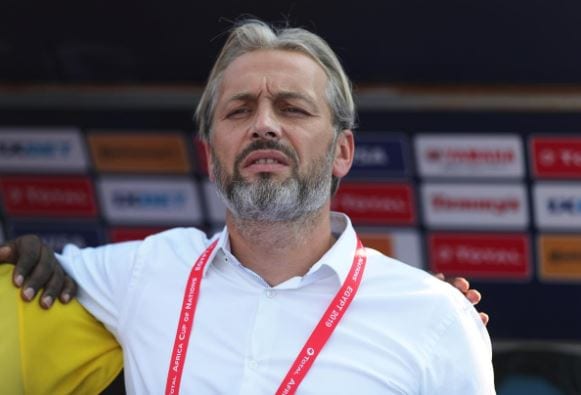 Uganda have parted company with coach Sebastien Desabre despite performing above expectations at the Africa Cup of Nations where they reached the last 16.

The Ugandan Football Federation (FUFA) said in a statement that it had “mutually agreed” to end the Frenchman’s contract.

“The reasons for termination of the employment contract are for the benefit and growth of both parties,” it said.

Desabre is the second coach to part company with his team at the tournament after hosts Egypt sacked Javier Aguirre immediately following their shock elimination against South Africa in the round of 16 on Saturday.

Uganda’s announcement was surprising as Desabre had led the team into the knockout round for the first time in 41 years and had spoken about the importance of developing football in the country.

Uganda, playing a bold attacking game, beat Democratic Republic of Congo in their opening game, outplayed hosts Egypt despite losing 2-0 and gave Senegal a run for their money in the round of 16 before losing 1-0.

However, their campaign was also hit by a payment row with players at one point refusing to train. It was settled after FUFA said it had offered the players an additional $6,000 each.

“FUFA recognises the contribution by Mr Desabre for the improvement of the sporting and professional organisation of the Uganda Cranes inclusive of qualification to the AFCON 2019 Finals and also to the Round of 16,” said the statement.

“Mr Desabre is grateful to the people and the Government of Uganda, FUFA, Sponsors, Staff and the players that have provided him a good environment to fulfil his obligations in his first time role as a National Team Coach.”

Desabre, 42, only played football semi-professionally and abandoned his career early to concentrate on coaching.

Before being appointed by Uganda in December 2017, he coached clubs in Ivory Coast, Cameroon, Tunisia, United Arab Emirates, Algeria, Morocco and Egypt.