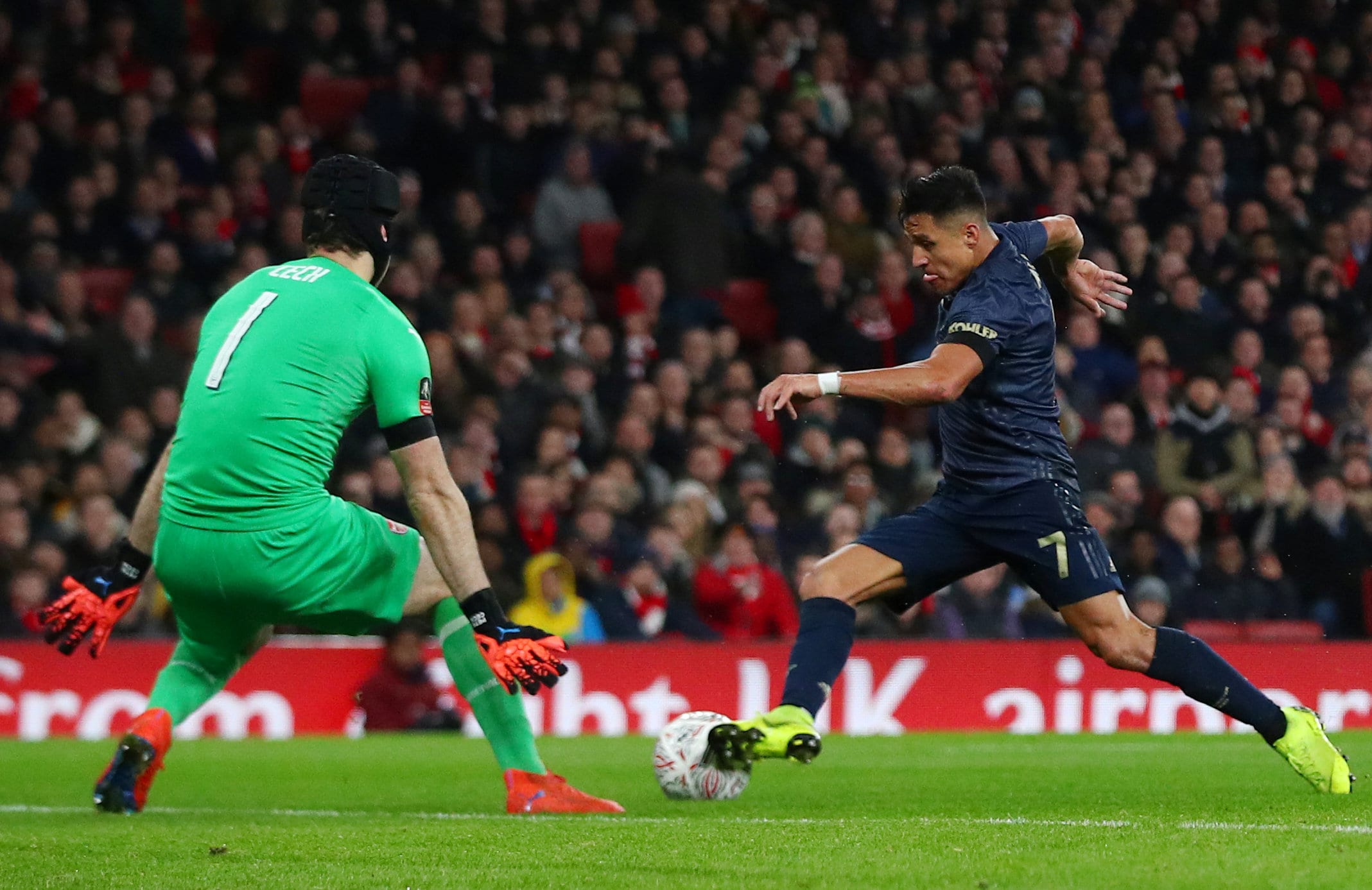 Chilean forward Alex Sanchez returned to haunt his old club with the opening goal in Manchester United’s 3-1 victory at Arsenal in a heavyweight FA Cup fourth-round clash on Friday.

In his first appearance back at the Emirates Stadium since swapping north London for Old Trafford a year ago, Sanchez silenced the inevitable boos to help continue Ole Gunnar Solskjaer’s remarkable start as United’s interim manager.

Sanchez and Jesse Lingard scored within two minutes of each other in the first half but Pierre-Emerick Aubameyang replied just before halftime to set up an engrossing second half.

Arsenal suffered injury blows, with defenders Sokratis and Laurent Koscielny both being forced off, although they pushed hard for an equaliser in the second period.

But United, who are second behind Arsenal in all-time FA Cup wins with 12, absorbed the pressure and sealed an eighth successive win for Solskjaer in the 82nd minute when substitute Anthony Martial tapped home after a counter-attack.

A feisty tie threatened to boil over late on with United substitute Marcus Rashford and Arsenal’s Sead Kolasinac squaring up near the touchline to spark a melee in which a coin was thrown from the crowd towards Lingard.

Rashford and Kolasinac were both booked with six yellow cards handed out in total by referee Craig Pawson.

United’s former Norwegian hitman Solskjaer arrived as a stop-gap with United at a low ebb after a rancorous few months under the sacked Jose Mourinho, but has transformed the mood at the club and appears to be unable to do any wrong.

“It’s fantastic to go through in the cup. It’s one of the hardest games you can get,” Solskjaer, whose start has eclipsed that of the great Matt Busby, said.

“It’s easy to get excited and talk about the future but we need to just keep working and think about the next game.”

United arrived brimming with confidence, especially after their Premier League win at Tottenham Hotspur a fortnight ago.

Solskjaer said Friday’s display was a step up on that display at Wembley and his decision to start with two players who have struggled for form, proved inspirational.

Sanchez, who scored 60 league goals for Arsenal in 4-1/2 seasons, revelled in a rare start in front of the fans who used to sing his name, while Belgian striker Romelu Lukaku produced one of his best performances in a United shirt.

Arsenal began brightly and United back-up Sergio Romero was the busier of the two keepers.

But Unai Emery’s side were rocked in the 31st minute when Lukaku’s superb reverse pass put Sanchez in and he calmly rounded keeper Petr Cech before clipping in from a tight angle.

Two minutes later an Arsenal attack broke down, Luke Shaw set Lukaku away down the right and the Belgian rolled the ball across for the unmarked Lingard to sidefoot past Cech.

Arsenal got a lifeline just before the break when the excellent Aaron Ramsey’s cut-back saw Alexandre Lacazette make a hash of his attempt but the ball arrived at the feet of Aubameyang who could not miss.

A hectic finish to an absorbing first half ended with Shkodran Mustafi heading just wide and straight after the interval Romero’s reflex save stopped a Koscielny header.

Koscielny’s involvement came to an abrupt end when the Arsenal skipper was accidentally caught in the face by Lukaku’s trailing leg — the Frenchman receiving lengthy treatment before groggily going off to be replaced by Matteo Guendouzi.

Out-of-favour Mesut Ozil also came off the bench, replacing Alex Iwobi, but Arsenal’s hopes of rescuing the tie were over when Paul Pogba surged clear and his shot was parried by Cech into the path of Martial who sent the United fans wild.