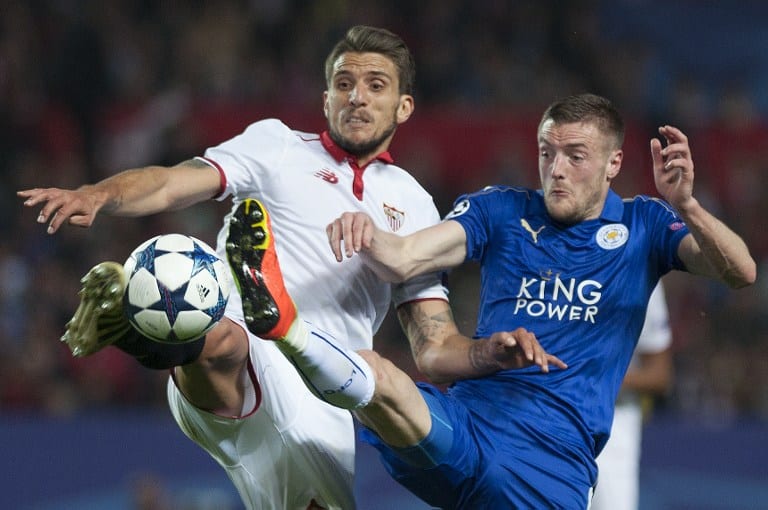 Goals from Pablo Sarabia and Joaquin Correa had given Sevilla a deserved 2-0 lead, whilst Correa also saw a penalty saved by the inspired Kasper Schmeichel.

However, despite Sevilla’s dominance, Schmeichel’s heroics and Vardy’s strike means the English champions are well in the tie ahead of the second leg at home on March 14.

The two sides couldn’t be in more contrasting form with Sevilla just three points off the top of La Liga, whilst Leicester face a relegation battle just a year after defying all the odds to win the Premier League.

Sevilla’s first big chance arrived 14 minutes in when Correa showed more fight and fleetness of foot than the Leicester defence inside the area and was chopped down by visiting captain Wes Morgan.

Correa won a battle with his teammates to take the spot-kick, but was less successful with a tame effort that Schmeichel easily collected.

The Dane then showed fine reflexes to get down low to his left to parry Sergio Escudero’s low driven effort from the edge of the box.

Sevilla finally made their superiority count 24 minutes in when Escudero’s cross from the left was met with a powerful header from his opposite wing-back Sarabia that nestled in the far corner for his ninth goal of the season.

The one way traffic continued as Stefan Jovetic’s looping long-range effort was turned over by Schmeichel before the ‘keeper produced another stunning stop to once again deny Correa.

Leicester didn’t have a single effort on goal in the first-half, but did at least test Sergio Rico early in the second period, albeit with a routine save when he collected Wilfred Ndidi’s volley from range.

Vitolo then nearly undid Schmeichel’s good work in the first half with an audacious effort from the narrowest of angles that clipped the inside of the Leicester ‘keeper’s near post.

Just as the visitors were beginning to gain a foothold, Sevilla doubled their lead as Jovetic held off two Leicester defenders then laid the ball perfectly into Correa’s path to finish high past Schmeichel from close range.

However, Claudio Ranieri’s men responded to get an away goal that could prove vital in three weeks’ time.

Danny Drinkwater broke down the left and his low cross was turned home on the stretch by Vardy for his first goal since December.

Leicester still had to see out a late onslaught as Sevilla sought to restore their two-goal advantage.

Adil Rami came closest when his thunderous header came back off the bar, but Leicester held out to maintain hope their maiden Champions League campaign can stretch into the last eight.