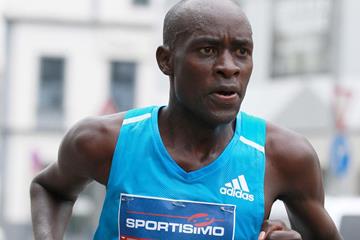 World 10km record-holder Leonard Patrick Komon is set to make his marathon debut in April after a glittering career in road races.

The 31-year-old represented Kenya in World Cross Country Championships for five consecutive years (2006-2010) beginning in the junior category before transiting to the senior races.

Having already made his half marathon debut in 2014, in Berlin,  a race he won in 59:14 minutes, Komon said he is ready to make his long awaited bow in the 42km race although he is yet to know the race he is set to grace.

“It is true I have been out for a while and it is because I am working towards shifting to marathon where I intend to make my debut in April this year. I have not known the race I will be taking part in but my manager is still working on that,” Komon told Citizen Digital.

Komon said he is happy to have represented Kenya in World Cross Country Championships where he managed to bag silver in the 2006 championships in junior race before settling for the same medal in 2008 in the senior race in Edinburgh, Scotland.

“I started representing Kenya since I was a junior and later as a senior, and for me, I think I am contented with what I achieved with the national team for those years,” Komon noted.

In 2010, Komon broke the World 10km record in a time of 26:44 after shaving off 17 seconds from the previous record of 27:01 held by compatriot Micah Kogo at the ABN AMRO Singelloop in Utrecht,  Netherlands.

Although the record still stands, World U-20 10,000m champion Rhonex Kipruto threatened to smash it at the Birell Prague Grand Prix last  September when he fell two seconds short after clocking 26:46 which is also the second-fastest 10km performance in history.

Komon revealed that he had a chat with Kipruto’s coach before the race and is optimistic that the youngster is destined for great things in future.

“Before Kipruto went for the race, we sat down with his coach and I told him I had no issue of him breaking my record. I told him to focus and although he did miss it by a whisker, I know he has potential to break the record in future,” said Komon.

His world record for 15km of 41:13  stood for eight years before Uganda’s Joshua Cheptegei lowered it to 41:05 in last year November.

“You know these records are there to be broken and I congratulate my brother from Uganda (Joshua) Cheptegei and I thank God having stayed with the record for more than eight years,” said Komon.

Hailing from Cheptais, Mt Elgon, Komon  is calling for more investment in upcoming athletes from the region, adding that the area has produced some of big names such as World U-20 3000m steeplechase champion Cellphine Chespol, former 10,000m world bronze medalist Moses Masai and former World 3, 000m steeplechase champion Milcah Chemos among others.

“Mt Elgon is a powerhouse when it comes to athletics in this country. However, there are challenges especially for the youths who have not earned enough support for their development.

“As athletes from this region we have already orchestrated a plan of pushing athletics to the next level in our region and we urge Athletics Kenya (AK) and the ministry to join us on the same, ” Komon observed.