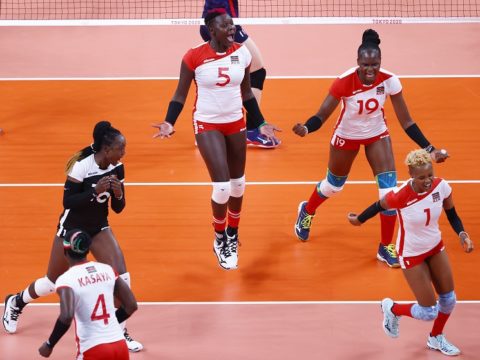 Kenya’s rivalry with Cameroon has enthralled volleyball in the recent years, and one of the African most enduring battles will be rekindled here in Kigali after the two heavyweights were drawn together in the Women’s African Nations Championships which gets underway Sunday.

Malkia Strikers, nine-time African champions, have prevailed in the last two matches the teams have met-at the African Games in Morocco and during the Tokyo Olympics qualifiers, but the West Africans have stood between Kenya’s record-tenth African title in the 2017 and 2019 editions.

In the draws announced Saturday night at the Kigali Convention Centre, the two heavy weights landed in pool ‘B’ to set up a potentially bruising battle as the two rivals prepare to shrug off the pre-championship tensions.

The other opponents in the pool are former champions Tunisia, Burundi and DRC Congo while pool ‘A’ has hosts Rwanda, Senegal, Morocco and Nigeria.

Malkia Strikers head coach Paul Bitok said he was keen to get off the blocks in the opening match which starts 4pm but was quick to warn he was not underrating the other teams.

“The championship has attracted very tough opponents who are ready for the title and my first aim is to qualify for the semis. It will be a kin to committing suicide if we focus only on Cameroon and forget we have good teams also like Tunisia who started their preparations as early as June,” Bitok told Citizen Digital.

“The squad is upbeat and we’re ready for the battle which starts in earnest against Cameroon. We’re determined to seize the title from Cameroon and that will come if we show character in all  our fixtures.”

Malkia Strikers, who are without their experienced setter Jane Wacu, held their final training at the Intare Conference Arena a day after touching down here in Kigali on Friday.

Fast-rising Esther Mutinda and Kenya Prisons’ Joy Luseneka will shoulder the responsibility of filling Wacu’s shoes after the latter was sidelined with head injury.

Wacu and former Kenyan international Janet Wanja command a combined experience of over three decades in the position.