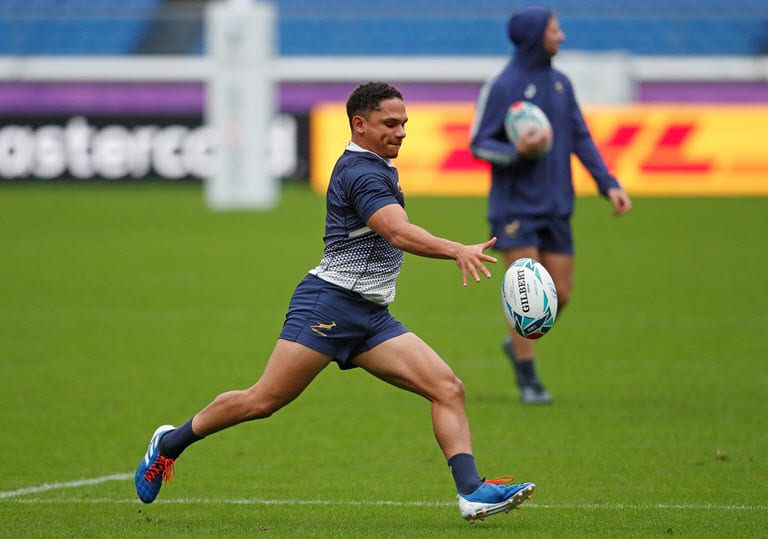 Wales will once again rely on the simple, disciplined tactics that have led to consistent results, and their chances will again hinge on a well-drilled, vastly experienced stonewall defence.

While the Welsh do not score many tries, their success has been built on that rock solid defensive unit, with the tries they have scored resulting generally from pressure plays rather than any great creativity.

With Liam Williams out, Wales have, in Leigh Halfpenny, another world class fullback which gives them security for any kicking duels.

While the big Welsh forwards will look to suffocate the Springboks’ play, Halfpenny and Dan Biggar will aim to put the South African defence under a lot of aerial pressure.

A lot will rest on the shoulders of Biggar, too, to kick the points Wales will need to reach their first World Cup final — including, possibly, drop goals – with Halfpenny taking over from 50-55 metres out.

“We’re going to need to tick the scoreboard over on Sunday, three, six, nine, and if it means drop goals …” shrugged skills coach Neil Jenkins.

“There’s not a lot of space in test match rugby any more so taking a three in terms of a drop goal is huge.”

Coach Warren Gatland has said that the match is likely to be a “kicking fest” and anticipates the contest will be “not the prettiest game in the world”.

Springbok rugby at its best has always been a combination of overwhelming forward power creating space for speed to tell in the outside channels.

The 2019 team have not varied far from the formula and the biggest pack in the tournament will hammer away at the gainline before being reinforced by the six fresh forwards on the bench.

The South Africans always aim to build pressure at the set piece and the rolling maul has proved an effective weapon at this World Cup, particularly one 50-metre drive last week in the quarter-finals.

Orchestrating the game are one of the best halfback combinations in world rugby at the moment in measured flyhalf Handre Pollard and Faf de Klerk, the dynamic halfback who belies his diminutive stature with some big tackles.

Both will put plenty of boot to ball and rely on the pace of outside backs Willie le Roux, Makazole Mapimpi and Sbu Nkosi to produce an effective chase and shut down the Welsh counterattack.

Pollard has been converting 75% of his shots at goal in the tournament and dropped a goal in the opening match against New Zealand, which will be reassuring to Springbok fans if, as expected, it is a tight game.