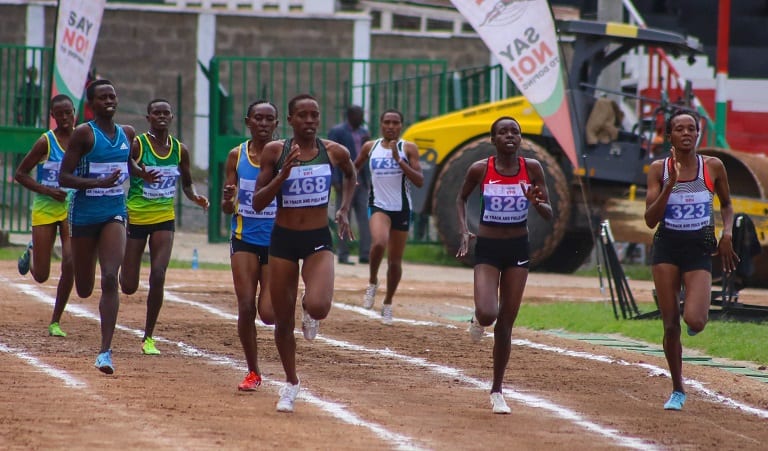 Mercy Wanjiru said she is focused on the forthcoming trials for the All Africa Games after blazing the 5000m field at the Athletics Kenya (AK) Field and Track championship in Narok.

Wanjiru, whose specialty is the 3000m, clocked 15:50.9 ahead of Lydia Jeruto of Torongo Athletics Club who placed second in 15:52.2 while Sela Chepleting of Kenya Defence Forces (KDF) sealed the podium places in 16:00.7.

Chepchumba timed 2:07.8 for the win with Torongo’s Judy Jepkoech trailing her to finish second in 2:08.4 while Josephine Nyakora of Kenya Prisons came third in 2:09.1.

Chepchumba who hails from Nandi county but trains at Iten said she is looking forward to earning a ticket to represent Kenya in for the first time in her career.

“I am happy to have won today after coming second in Nyeri and fourth in Mumias. I am now going to focus on speedwork as I prepare for the trials,” said Chepchumba.

Moses Kipkemoi emerged the winner in the men’s race after timing 1:48.1 with Evans Biwott (1:48.4) and Kumari Taki (1:48.7) finishing second and third respectively.

In the corresponding men race, Boaz Kiprugut reigned supreme in 3:44.5 followed by Daniel Munguti who clocked
3:45.3.

In sprints, Dan Kiviasi of Prisons clocked 21.3 to win the men’s 200m followed by Peter Mwai (21.5) and Hesbon Ochieng (21.6) who were ranked second and third respectively.

In the women category, Hellen Syombua timed 23.6 to win the race ahead of Maximila Imali who finished second in 24.2 as Maureen Thomas came in third in 24.3.

The nature of the track at the stadium however proved to be a challenge to the athletes due to the heavy rains witnessed yesterday the two inner lines muddy which proved to be an obstacle to athletes.

At the tail end of the event officials and athletes alike united in solidarity for a 200m walk in sensitisation against doping.

“The march was meant to continue our campaign against doping because right now are in category A of countries and IAAF watch list,” said AK President Lt. Gen Rtd Jackson Tuwei.

The Narok meet marked the end of the Athletics Kenya Track and Field championship this season, with the focus now shifting to the national trials for the All Africa Games slated for June 20-22 at the Nyayo National Stadium.