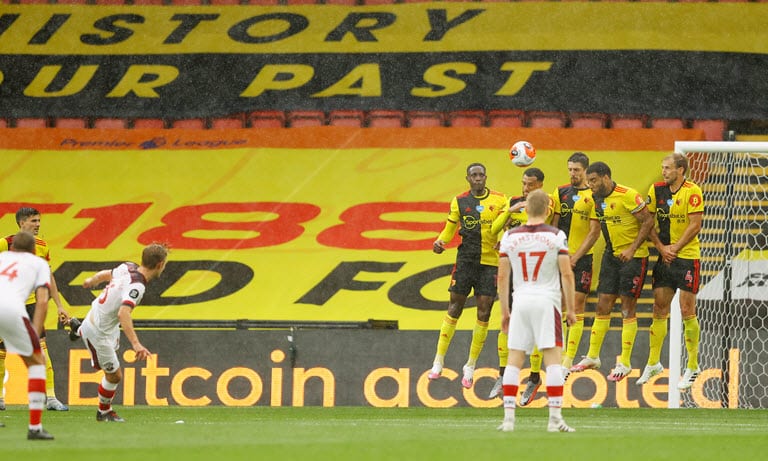 Watford were dealt a major blow in their bid to avoid relegation as they suffered a 3-1 home defeat by Southampton after a Danny Ings double and James Ward-Prowse’s stunning late free kick for the visitors in their Premier League game on Sunday.

Saints started strongly and took a well-deserved lead in the 16th minute when Ings glided past the challenge of two Watford defenders before curling a low effort into the far corner.

Ralph Hasenhuettl’s side were unlucky not to grab a second in the 24th minute when Ward-Prowse skied his effort from close range after latching on to a cross-field pass from Oriol Romeu.

Watford, who had omitted Andre Gray, Nathaniel Chalobah and Domingos Quina from their squad after British media reported a lockdown breach, started the second half strongly but failed to test Saints keeper Alex McCarthy.

However, the hosts found themselves two goals down in the 70th minute when Ings intercepted a wayward throw out from goalkeeper Ben Foster before driving towards the penalty area and firing home his 18th league goal of the season.

“It was a physical battle and the lads really fought hard,” Ings said as Southampton bounced back from a 2-0 home loss against Arsenal on Thursday.

“After the last game, we were very disappointed. It was important we came here and did something about that. I just want to play each game and score as many goals as I can,” he added.

Jan Bednarek’s own goal handed the Hornets a late lifeline but Ward-Prowse’s free kick in the 82nd minute sealed the victory for Saints, who set a club record with eight away wins in a single top-flight league campaign.

Southampton could have added a fourth goal late on but Che Adams’ effort was kept out by Foster before Nathan Redmond’s curling strike ricocheted off the post.

Hasenhuettl said he was pleased with the way his side responded after their defeat by Arsenal.

“Today, we were more concentrated, more clinical and made better decisions,” he said. “This is what we have to learn and when I see the performance in general, today was absolutely a step forward.”

“It is frustrating, because we are not achieving the performances we know we are capable of,” he said as Watford suffered their second straight league defeat.

“It is about us approaching games with the positive intent, showing more support for each other on the pitch,” he added.

The result took Saints up to 13th place with 40 points, while Watford remain in 16th with 28 points, one point ahead of third-bottom Bournemouth, who have a game in hand.