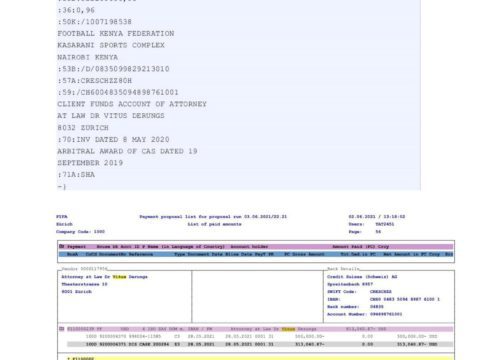 The 2022 World Cup qualifier between Kenya’s Harambee Stars and Ugandan Cranes set for September 2 is on and so is the clash against Rwanda’s Amavubi Stars on September 5, FKF chief executive officer Barry Otieno has told Citizen Digital.

Reacting to speculation that Kenya may be barred from competing in the qualifiers for ‘failure’ to pay its former coach Adel Amrouche his dues, Otieno laughed off the claims insisting that the Stars will host the Cranes at the refurbished Nyayo National Stadium on September 2 before boarding the plane to Kigali for face the Rwandan Wasps three days later.

“The federation’s position is that Amrouche was paid in full and the matches are on. That’s our position,” Otieno said. “There is nothing to hide in this matter.”

According to documents in our possession, the Belgian tactician was on June 3 2021 paid his dues via SWIFT Code to a bank domiciled in Zurich, Switzerland.

Kenya are in Group E of the 2021 qualifiers with Mali being the other member of the group.

The Stars have never competed at the World Cup showpiece but will be aiming to be break their duck this time round under veteran coach Jacob ‘Ghost’Mulee.