Who is Clarke Oduor and where will he fit for Stars? 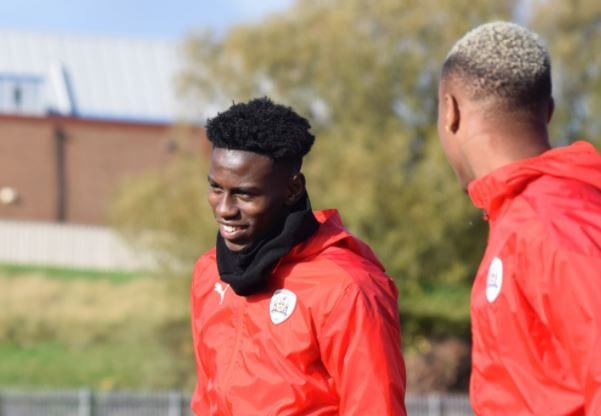 When former Harambee Stars head coach Francis Kimanzi first called up Clarke Oduor for the international friendly against Zambia played on October 9, football enthusiasts in Kenya were keen to see how he would be slotted in and what impact he would have.

Oduor, 21, is just one of the several Kenyans playing abroad from their formative ages, and is viewed as a potential game changer if well blended with the rest of the homegrown stars.

While many foreign-based players have elicited much anticipation but ultimately failed to exert the influence to match it, there is plenty of promise that Oduor could indeed galvanise Harambee Stars.

That he features for an English Championship side and has been active on the rise especially in the current campaign, is near if not enough to justify he is an asset for the national team if well developed.

And, when Kimanzi called him and could not make it to camp early enough, he could only afford about 20 minutes against Zambia as the coach had promised. He had travelled all the way, and there was no way he was to return without being tested.

In the post-match interview (after the Zambia win), this is what Kimanzi had to say about Oduor: “I first congratulate him for making it to the camp albeit in the last minute despite the travel challenges due to COVID-19 protocols.

He had no time to learn the environment around the team but from the few minutes he played, he has shown there is more to offer if we give him a chance and another.

“We have to start building for the future. That is why we are giving them a chance lest we be caught unawares when some of the senior players will be retiring,” said Kimanzi after the match, mentioning another youthful player called up alongside the Barnsley man, Mohammed Katana of Isloch – Belarus.

From the submission, it was expected he would be returning for the Comoros 2022 African Cup of Nations (AFCON) qualifiers set for November.

One of the problems exposed in the team that was fielded against Zambia was match-fitness, thanks to the stoppage of sports activities in the country in the wake of COVID-19 since March 2020.

Thus, available players featuring in top competitive leagues were the easiest guess for the Comoros ties. Such is Oduor, whose league’s competitiveness is arguably above any other current generation of Kenyan players.

Fast forward, on Sunday, new coach Jacob ‘Ghost’ Mulee announced his team and there was no Oduor in his 40-man list. He was not the only change, as a few other players had been dropped.

It goes without saying that his left flank role in the team would mean edging ever industrious AIK’s Eric ‘Marcelo’ Ouma who has been effective in the position, but the more the merrier. Competition in any team is progressive, both for the players, coach and the fans.

A source privy to Kimanzi’s plans with the former EPL side Leeds United defender told Citizen Digital that he was firmly in his plans for the Comoros matches.

“He told him “see you soon” as he left after the Zambia friendly. He talked of observing him in the large group for the three matches, and would have gotten the answer about him by the time they were done. There was little he could gather from him in the two days he was with the team, being his first time.”

Oduor, who has featured in the three matches Barnsley has played since the Zambia friendly (against Bristol, Stoke and Millwall), was excited about the call up and was already talking about Kenya’s “good” AFCON chances soon after the friendly.

“A veteran coach in the country says such players should be delicately treated for their own sake and for their peers with similar backgrounds.

“There are several players who can play for Kenya but they have been abroad since their childhood. The way we treat their contemporaries’ matters a lot in the way they react if called up for the future.

“The story does not end with the ones we know today, but the future generations who may refer to previous cases,” said the coach, carefully noting Oduor’s omission from the team for Comoros’ matches did not imply his chapter was entirely closed.

“We cannot make conclusions now. Who knows, he could be in the team for the next assignment. He must be hoping that the call up was not just to tie him down from a possibility of representing another nation,” he added, preferring anonymity.

Mulee, on his unveiling, said he was going to work with the team his predecessor Kimanzi had built especially for the ongoing qualifiers, but did not elaborate on his development agenda within his three-year contract.

“It is a principle in coaching that you don’t change a winning team. I’m already thinking of the Comoros match, not even about the job entirely. That’s where my focus is,” he said, signaling he was concentrating on a relatively small group. It however turned out different after naming his 40-man squad, to be whittled down by a half for the matches.

Oduor started his career at Leeds United’s academy and on January 16, 2017, he signed a professional deal at the club where he was given the number 54 shirt.

He made his professional debut on January 6, 2019 when he came on as an 85th-minute substitute for Leif Davis during a 2–1 defeat to Queens Park Rangers in the third round of the FA Cup.

In February 2019, Oduor signed a new contract at Leeds, extending his deal until the end of the 2019–20 season with the option of a further year.

He featured regularly for Carlos Corberán’s Leeds United Under 23’s side over the course of the 2018–19 season, showing his versatility by playing as left back, left wing back, winger and as a forward.

On July 13, 2019, Oduor was one of the 16 players named in Marcelo Bielsa’s first team squad for Leeds’ 2019-20 pre-season tour of Australia for matches against Manchester United and West Sydney Wanderers.

On deadline day August 2019, he signed a four year deal to join Barnsley becoming the fourth young player to make the switch from West Yorkshire to South Yorkshire in the 2019 summer transfer window.

Although he was bred as a center-attacking midfielder, he played at left-back replacing an injured Ben Williams.

He scored his first career goal in the 93rd minute of the 2019-20 season against Brentford to keep Barnsley in the Championship while relegating Charlton Athletic in the process.