Why Leopards coach Aussems is pushing for squad reinforcement 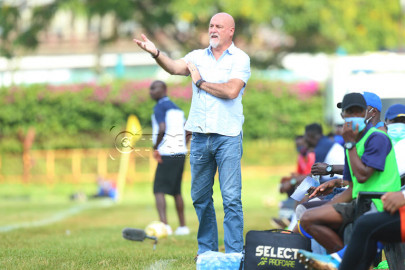 The Belgian has a depleted team full of youngsters who were promoted from the academy following the departures of 17 players in the last transfer window.

AFC Leopards head coach Patrick Aussems is hopeful the club will back him to bring in not less than three new players to bolster the squad.

The Belgian has a depleted team full of youngsters who were promoted from the academy following the departures of 17 players in the last transfer window.

Aussems has however called upon the Leopards hierarchy to fix the issues facing the current playing unit before adding more players to the roster.

“I would like two or three players to be signed and I have told the management and now it's up to them to act.

There is already another problem, another issue that I think the management needs to fix first, the issue of current players, and after that, then we may have to think of bringing in strikers.

If we don’t recruit a new striker then we will have this problem (goal drought) all season,” Aussems reflected.

Ingwe have been forced to turn to the services of youngsters Maxwell Otieno and Nigerian import Fasanmi Ojo for goals, a situation that Aussems says is dangerous should they get injured.

“Imagine if something happens to Kingslay (Fasanmi Ojo) or Maxwell (Otieno) then we are in trouble. I would like to remind you that Maxwell, contrary to last season, is now one of our key players. Can you imagine the situation?” he posed.

Midfield is also another department that needs reinforcement to give cover for Eugene Mukangula.

“He has scored three goals in the last three or four games but unfortunately the biggest problem of Eugene is that after 55 or 60 minutes he can’t run anymore and so what I usually ask of him is to give 100 percent in those 60 minutes.

But I know that before the game I will have to bring on someone to take over his place after those minutes yet when I look at the bench there is no one to fill that gap,” said Aussems.