Why Mukangula is Leopards main man in quest for top spot 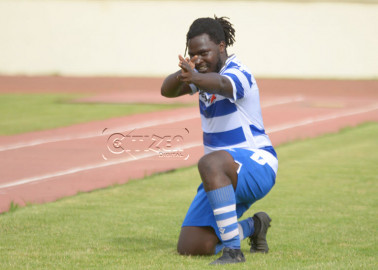 Due to his work repertoire, head coach Patrick Aussems has not missed words to praise Mukangula.

Surprisingly, in a swift turn of events, the Kenyan powerhouse, after losing a whopping 17 senior players in the last transfer window, have found themselves depending on the former Thika United midfielder who joined Ingwe in 2018 to pull the strings up.

At the moment he’s not just the team’s midfield engine but is also weighing upfront with the goals. He so he has plumbed five goals making him the club’s top scorer, despite clocking just 60 minutes in most of the matches he’s played.

Due to his work repertoire, head coach Patrick Aussems has not missed words to praise Mukangula.

“We were expecting six points out of six and it’s never easy to beat the same team in two matches in a row,” Aussems reflected after the 2-1 weekend win over Mathare United.

I could say that the first goal at the stroke of half time (from Eugine Mukangula) killed the morale of the other team and that is what helped us push for the winning goal,” Aussems said.

Leopards have only won five matches this season, scoring only 15 goals in 16 matches and Mukangula’s goal tally and consistency is very significant in helping the team turn around their fortunes.

Aussems also hailed the efforts by his other goal poacher Fasanmi Ojo for the second goal which secured the weekend win. Interestingly, this was the second goal for the Nigerian in Leopards’ famed blue and white jersey and the Belgian is confident that the import can now score in seven matches on the trot. .

“I’m happy for Kingslay Fasanmi Ojo (for scoring his second goal). I told him that you can go five, six games without scoring and again turn it around and score in five, six games on the trot.

But I must say that it goes down to the team work of my players for that win, which is the most important thing for now,” Aussems concluded.

After going seven matches without a goal and now banging in two in as many matches, Ojo could become a fans favourite should he find consistency in the succeeding games.

Leopards now trail the league leaders Kakamega Homeboyz by 12 points after round 16 and have no further room for mistakes if they are to put pressure on the teams at the top.