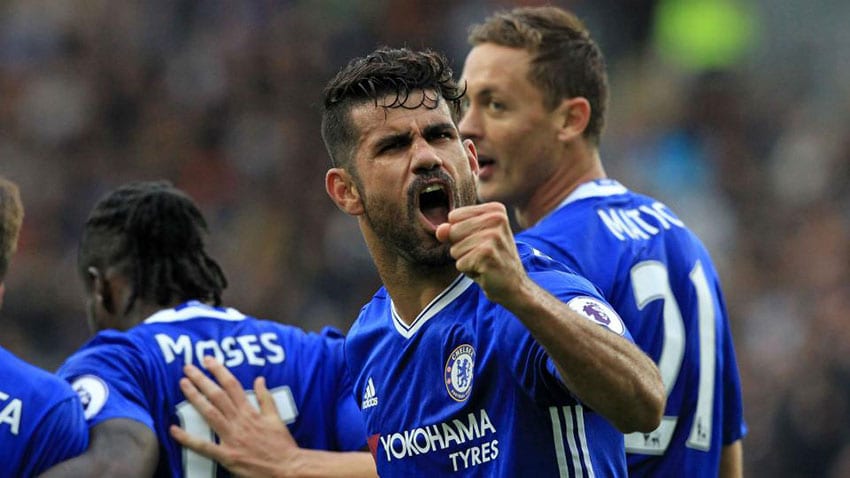 Willian struck in the 61st minute after Chelsea launched one of a series of increasingly dangerous counter-attacks.

Costa’s pass picked out the Brazilian, who checked, putting his defender out of the game in the process, before curling an unstoppable shot into the top-right corner of the Hull goal.

Six minutes later the game was put beyond Hull’s reach in similar fashion.

Having powered into the area, Nemanja Matic saw a shot blocked by Curtis Davies, but Costa latched onto the rebound to bend a shot past Hull goalkeeper David Marshall for his sixth goal in seven games.

Victory provisionally lifted Chelsea to sixth place in the table and saw Hull drop to 15th.

Yet Hull had forced Chelsea goalkeeper Thibaut Courtois into the only two saves of significance in the first half and, in between, gave as good as they got against a club they have not beaten in 28 years.

After just four minutes, and a David Luiz foul on Dieumerci Mbokani, Robert Snodgrass’s terrific 25-yard free-kick forced the Chelsea keeper into a twisting save as he turned the ball over his crossbar.

In first-half injury time, Ryan Mason gathered the ball 25 yards from goal and unleashed a strong shot that Courtois appeared to see late as he forced it behind for a corner.

Chelsea started with a three-man defence, a tactic adopted by manager Antonio Conte in the second half of last weekend’s 3-0 defeat by Arsenal, which meant Branislav Ivanovic lost his place.

The move saw winger Victor Moses make his first start for the club since May 2013 at wing-back, underlining Conte’s desperation to end his team’s recent run of poor form.

Willian looked a lively performer for the visitors as he attempted to spark them into some attacking life and on 16 minutes the Brazilian just missed the far post with a low, driven shot.

Moses also might have won a penalty on another day, with replays suggesting he had been tripped by Adama Diomande.

But for all Chelsea’s possession, there was not a serious moment of concern for Marshall in the Hull goal over the opening 45 minutes.

His first real test came in the opening minutes of the second period as Eden Hazard turned his man just inside the home half and darted towards goal before dispatching a curling shot that Marshall diverted over.

The ensuing corner was only half-cleared by the home side and N’Golo Kante latched onto the rebound with a low shot that Marshall smothered easily.

The pressure was mounting, with Chelsea looking particularly threatening on the counter-attack, through Costa and the pairing of Willian and Hazard behind him.

That combination should have brought about an opening goal on 58 minutes.

Kante’s through-ball was perfectly weighted and allowed Costa to round Marshall before shooting goalwards, the ball passing through the legs of Sam Clucas and striking the foot of the post.

The rebound fell kindly for Kante, but the former Leicester City midfielder hurried his follow-up attempt, sending the ball high and wide.

With Chelsea looking more and more menacing a goal soon followed and matters might have worsened for the hosts three minutes later as Costa saw an 18-yard shot parried by Marshall following another break.

Costa, with a wild shot from the corner of the six-yard box, and Oscar, whose low attempt was pushed away by Marshall, might have further extended the visitors’ lead in the closing minutes.