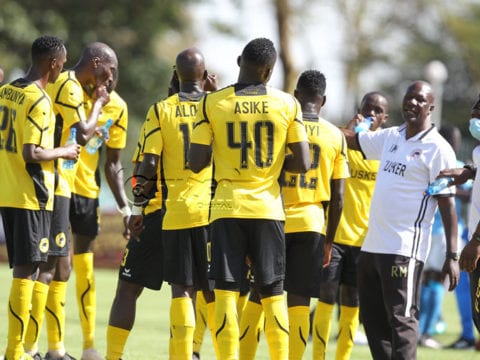 With FKF-PL title for the 2020/2021 season in the bag, the rigorous preparations for CAF Champions League begin for Tusker with the Kenyan champions aiming to go beyond the first preliminary round at which they exited in 2017.

In their last continental action in 2017, Tusker were bundled out by AS Port-Louis 2000 of Mauritania after they fell 3-2 on aggregate in the group qualification match.

This year’s draw saw Tusker draw against Djibouti’s AS Arta Solar in the first qualification round whose first leg fixtures will be taking place between 10th and 12th September and the return leg played the week later.

The aggregate winner will meet Egypt’s Zamalek in the next round.

FKF nominated Tusker to represent Kenya in Africa’s top tier club competition by virtue of leading the FKF Premier League table on 30 June, and the Brewers went on to prove they deserved that slot two months later when they lifted the title.

Tusker have been promised total financial and technical support by their lead sponsors Kenya Breweries Limited. According to KBL Chief Executive Officer John Musungu, the company is working on a mechanism that will see the team get total support during the competition.

“Seeing them qualify for the CL is a phenomenal achievement for us, we had not planned for it but we committed to sponsor them to as far they make in the CAF Champions League,” Musunga said.

So far according coach Robert Matano, due to Covid-19 restrictions the team might not prioritize playing friendlies outside the Kenyan borders, instead Tusker will play build up matches against local teams.

“Good preparations will help us do well in the continental competition, they have said (sponsors) friendly matches will give us that exposure we need.”

Matano acknowledged his side were short of continental experience but expressed optimism that his charges will make it to the group stages.

“After assessment [of friendly matches] we will know how we will approach our opponents but all in all we are determined, focused and i know we will do well.”

Tusker have been inactive in the transfer market but have so far captured the signature of Charles Momanyi who left Gor Mahia FC to join the Brewers.

He is the first piece of a number of players targeted by Matano in his reinforcement plans ahead of the competition. Its rumored that Tusker is still chasing the signatures of former AFC Leopards and St-Georges of Ethiopia shot-stopper Patrick Matasi.

With just a month to the resumption of FKF-PL season 2021/2022, Tusker will not have enough time to prepare for continental competition and this will in a way affect new signing who may need time to settle in the team.

In 2017, the Brewers had registered 26 players to take part in the CAF Champions League tournament, 23 have since left the club with captain Eugene Asike, Cercidy Okeyo and Humphrey Mieno Ochieng being the remaining players who took part in the tournament. The club then, was under the tutelage of Paul Nkata, who has since been replaced with Robert ‘Lion’ Matano.