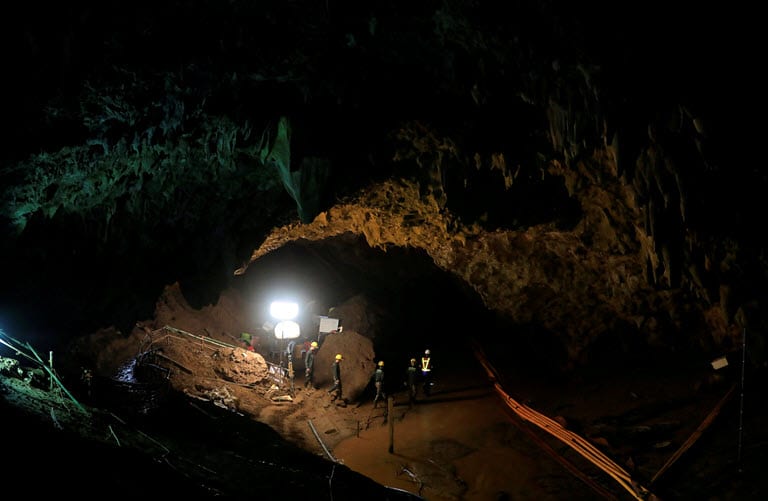 With victory dedications, soccer shirts and offers of tours and match tickets, some of soccer’s biggest names are cheering the rescue of 12 Thai boys and their coach from a flooded cave, a drama as gripping as the World Cup now at the semi-final stage.

The last of the “Wild Boars” football team and their coach were brought out of the cave late on Tuesday after a dangerous rescue that unleashed joy across Thailand, and earned the boys celebrity plaudits from Italy and Spain to England and Brazil.

France midfielder Paul Pogba called them “heroes of the day” and dedicated to them his country’s 1-0 win over Belgium, a victory that catapulted Les Bleus into the World Cup final for the first time in 12 years.

“Well done boys, you are so strong,” Pogba said on Twitter.

England are determined to meet France and will play Croatia in the other semi-final in Moscow on Wednesday.

Walker Tweeted a picture of one of the boys in the cave, who wears a red England shirt, and asked where he can send them jerseys.

“Amazing news that all of the Thai kids are out of the cave safely!” he said.

Italian club AS Roma called the successful mission “the best football news of the summer”, and offered its condolences to the family of former navy diver Samarn Kunan, who died during the rescue last week, after delivering the boys oxygen. It said he was “a real hero”.

A Thai health official on Wednesday said most of the boys, who are aged 11-16, had lost some weight but were in good condition and showed no signs of stress, despite more than two weeks trapped deep in the cave.

The boys were in quarantine in hospital on Wednesday, where they will remain for a week for tests.

That means they will not be taking soccer’s world governing body FIFA up on its offer to attend Sunday’s World Cup final in Russia.

“We will look into finding a new opportunity to invite the boys to a FIFA event to share with them a moment of communion and celebration,” it said.

But the “Wild Boars” will get their chance to go on tour once fit.

The foundation of Spanish side Barcelona has invited them to attend an international tournament of the club’s academy, and watch a match at the Nou Camp stadium.

The boys and those who saved them can also look forward to a trip this season to the “Theatre of Dreams”, otherwise known as Old Trafford, the home of English giants Manchester United.

“We would love to welcome the team from Wild Boars Football Club and their rescuers,” the club Tweeted.