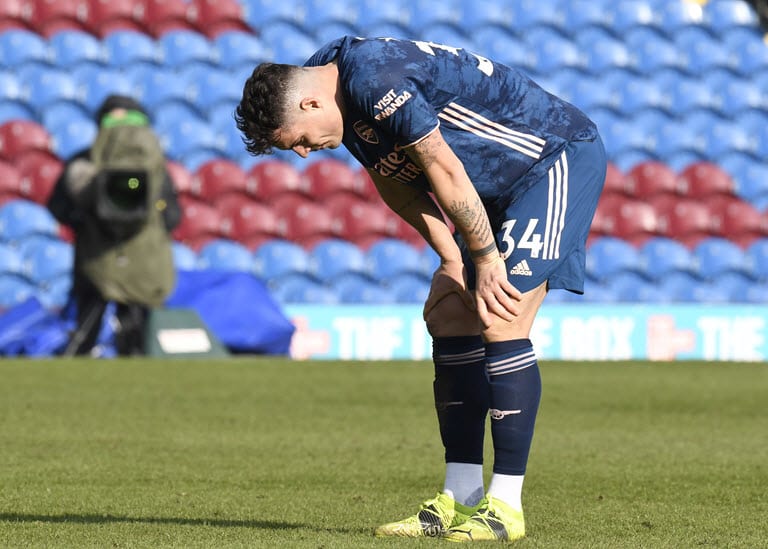 Granit Xhaka suffered another day to forget against Burnley as his error presented Chris Wood with a bizarre equaliser in a 1-1 draw to deprive Arsenal of a Premier League victory at Turf Moor.

Xhaka, who was sent off in the Gunners’ December defeat by Burnley, received a short pass facing his own goal from keeper Bernd Leno and tried to clip a square ball to David Luiz across the penalty area.

However, he succeeded only in hitting Wood in the midriff and the ball bounced into an empty net for the softest of levellers.

Arsenal had appeared to be in cruise control after Pierre-Emerick Aubayemang’s near-post strike beat Nick Pope to give the Gunners an early lead.

But Aubameyang and Bukayo Saka wasted chances to stretch the advantage and Arsenal were made to pay when Leno’s unwise pass to an under-pressure Xhaka was compounded by the midfielder’s mistake.

Burnley twice went close to turning the game on its head in the second half but Leno first produced a fine save to keep out Erik Pieters’ dipping 30-yard volley, and then used his leg to deny Wood in a one-on-one.

Arsenal thought they had been awarded a late penalty against Pieters but the spot-kick and the defender’s red card for deliberate handball were overturned by the video assistant referee after replays showed he had diverted Nicolas Pepe’s shot onto the bar with his shoulder.

That was not the end of the late drama as Ben Mee’s block denied Aubameyang a sure-fire winner in stoppage time before Calum Chambers crashed an effort against the post in his first league start for 14 months.