The 2018 Africa Athletics Championships will go down the memory lane as one of the most memorable events for Kenya in the competitions history, embroidered in both ugly and admirable scenes.

Team Kenya had to withstand the pain and shame of  poor planning by the hosts, ranging from abandonment in Lagos for close to 48 hours due to lack of a connection flights to the Delta State Capital where the competition was held , to some key athletes missing out in the completion.

Poignantly, at the apex of the Games, Kenya sunk into mourning after the untimely demise of former 400m hurdles champion Nicholas Bett. 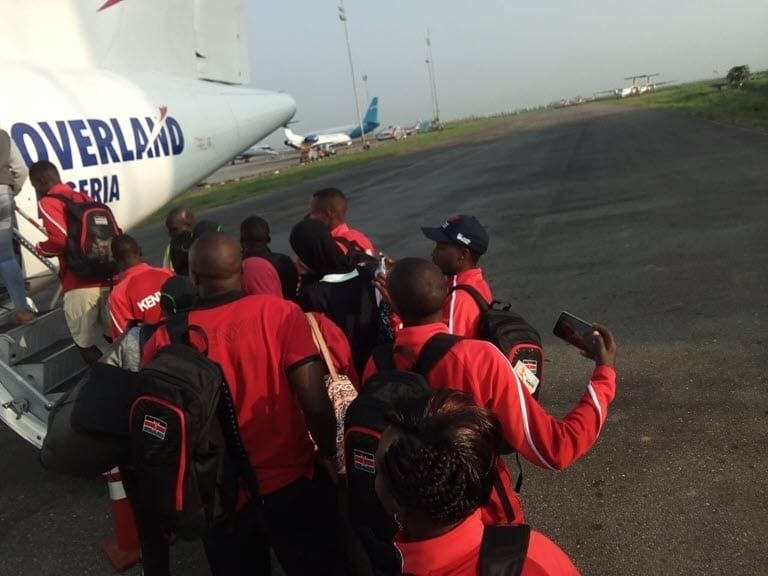 Part of Team Kenya board a plane from Lagos to Asaba for the 2018 Africa Athletics Championships after a 48-hour delay. (PHOTO/Courtesy)

The gallant athletes were however not deterred in their quest for continental glory, topping the medal standings in the 21st fiesta since the 1982 Cairo event, with 19 medals- 11 gold, 6 silver and 2 bronze.

World 5,000m champion Hellen Obiri won the first gold in the women’s 5000m while Emmanuel Korir wrapped up the men’s 4x400m relay’s in style to win gold in the last day of the championship. 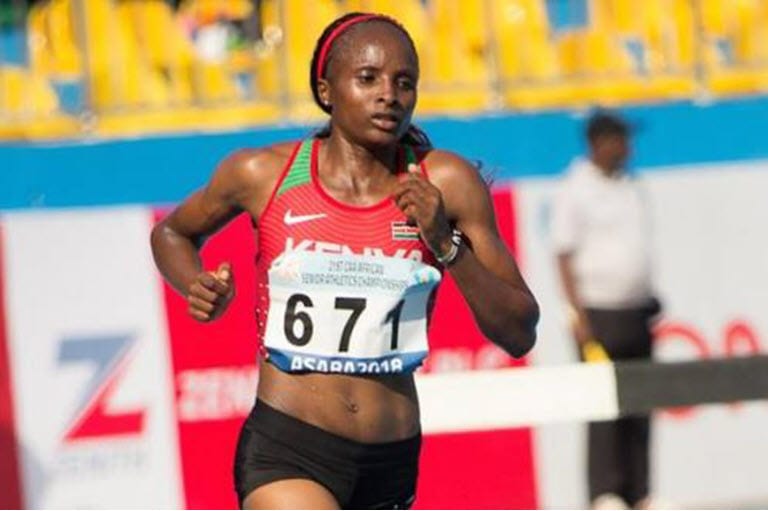 “In the true Kenyan spirit of resilience, our athletes achieved a sterling performance. We are all very proud of every member of Team Kenya,” tweeted Kenyatta.

Deputy President William Ruto, on the other hand, acknowledged the team for what he termed as confirmation of sporting prowess across the continent.

“With 19 medals: 11 gold, six silver and two bronze, Kenya confirms its unrivalled position as a powerhouse of sports and a breeding ground of talent. We salute Team Kenya for an energetic, passionate showing at African Senior Athletics Championships. You are all winners,” posted Ruto.

“You have proven that everything is possible with hard work, determination and teamwork. You have done us proud. Kenya Celebrates You! Hongera,” Echesa said. 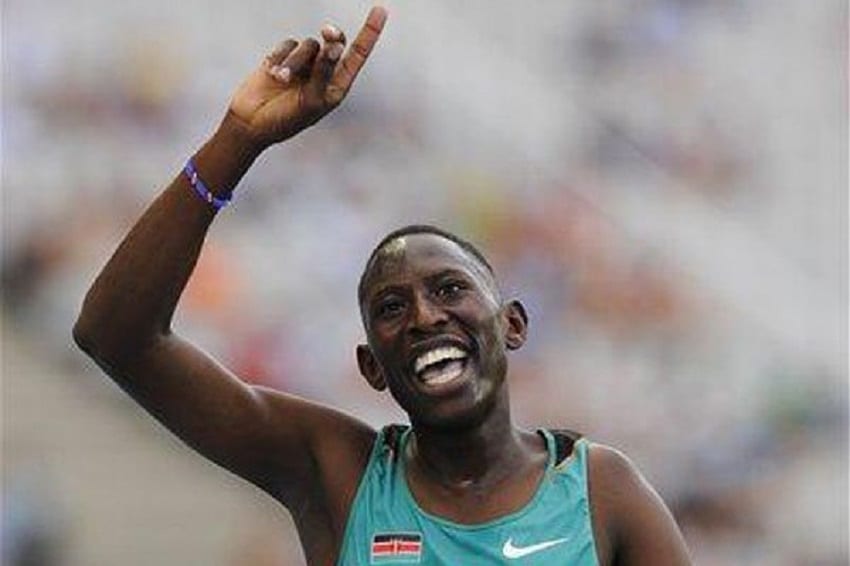 Two Days later after Kenya celebrating the exemplary results, the painful demise of Bett, who was part of Team Kenya to Asaba, was reported. Bett died in a road accident at Sochoi along the Lessos-Kapsabet road in Nandi County in the early morning of August 8, 2018.

He had arrived back from the 2018 Africa Championships in Nigeria, and was driving along the Kapsabet-Eldoret road on his way back to his home in Lemook village, Uasin Gishu County.  Police reported that Bett hit a bump and lost control of his car, which then landed in a ditch, killing the athlete instantly. 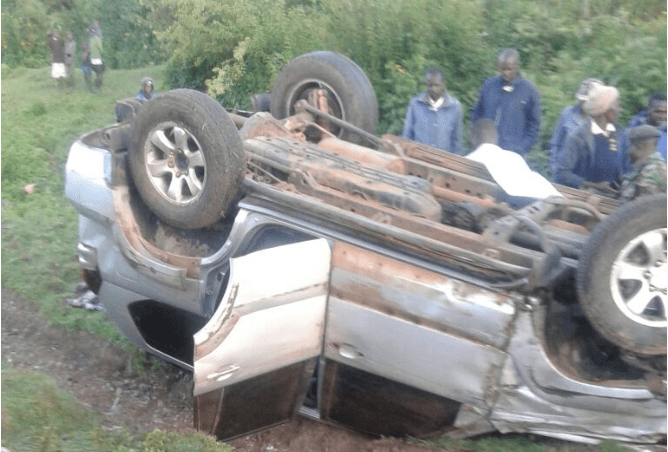 The car that Nicholas Bett was aboard on his fateful day. Photo/COURTESY

Athletics Kenya led by Nairobi chairman Barnabas Korir mourned the death of Bett referring him to as the best athlete in the sphere.

“On Wednesday, we woke up to the sad news that the 2015 world 400 metres hurdles champion Nicholas Bett is no more. I can’t even come to terms with the fact that the same young man was part of the team that returned from Asaba, Nigeria, on Monday after topping the continent at the African Championships. I feel for his young family and pray to the good Lord to give them strength during this trying moment.

“To his father, a former athlete, and his brother Aaron Koech, who is one of the four athletes who delivered the gold medal in the 4x400m relay, I can only say pole. This is equally a big blow to Athletic Kenya (AK) considering that Bett was the first athlete from Kenya to win gold at the World Championships in 400m hurdles,” read the emotional message by Korir.

In his final send off, Ruto and other government officials, speakers at the funeral eulogized Bett as a great inspiration to young people in the country. 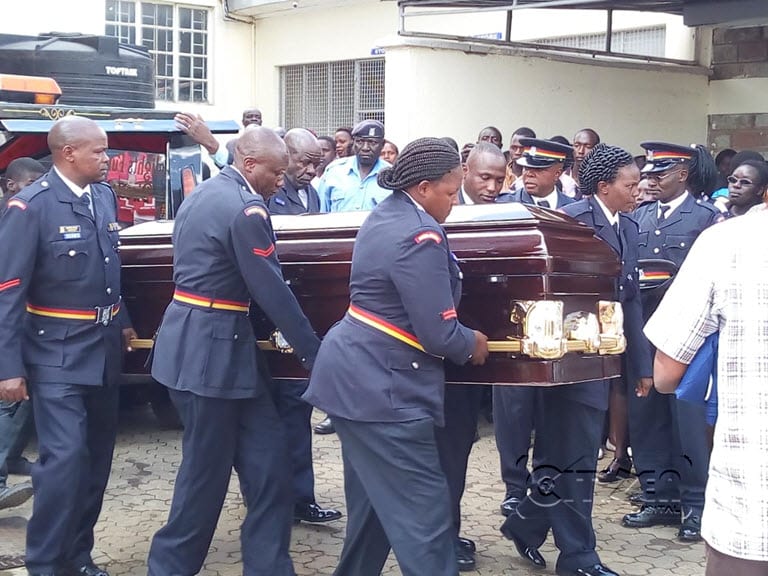 “Bett will be remembered for hard work and dedication which played a crucial role in athletics,” said Ruto.

Echesa said Bett will forever be remembered for carrying the name of the nation high.

“I’m here on behalf of my family to say pole to the bereaved family. I met Bett in Gold Coast, Australia during the Commonwealth Games where we interacted and became good friends. It is unfortunate that he’s no longer with us. I want to announce here that Bett died a hero. We shall celebrate him even in his death.

“Bett was a much disciplined athlete who never indulged in doping. We have lost a hero. On that note, we shall honor Nicholas Bett upon the completion of the Kipchoge Stadium in Eldoret,” Tuwei said.

Steeplechase legend Ezekiel Kemboi was overwhelmed with emotion as he made a moving eulogy of his deceased friend.

“I have been with Nicholas since the time he started his career. I have been in Team Kenya for more than 20 years and I have been advising him and others, I have lost a close friend. It is so hard to imagine that he is no more,” Kemboi said breaking into tears.

As if gods had conspired that the Asaba Games be concluded on a sad note despite the phenomenal show by Kenyans, it was Bett’s demise that washed away every tear of joy with tears of pain.