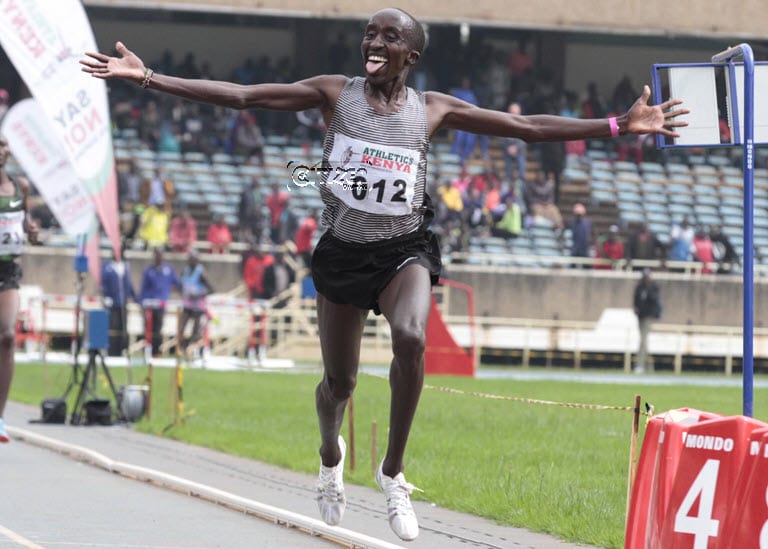 World Under 20 5,000m champion Edward Zakayo and African 800m silver medalist Emmanuel Korir stormed to the finals of the 5000m and 800m respectively in the African Games trials that kicked off today at the Moi International Sports Centre, Kasarani.

Zakayo who is fresh from victory at the Rabat Diamond League clocked 13:44.8 to finish second on his heat.

The Commonwealth Games 5000m bronze medalist had earlier disclosed that he would be missing out on the trials, however,  he made a u-turn as he eyes another continental title.

“I am happy that I am through to the finals although I felt tired since I was just coming from Rabat. My focus was the World Championships but after engaging Athletics Kenya I found it important to participate in Africa Games,” said Zakayo.

On his part, Korir clinched victory in the men’s 400m preliminaries to clinch a slot in the finals slated for Saturday.

Fresh from competing at the Rabat Diamond League where he finished second in 800m, Korir took part in 400m winning his heat.

“I have decided to compete in 400m which I was using as part of my speed work.  I would like to compete in relay team although at the moment I am not decided if I will be competin in 800m,” disclosed Korir.

World under-20 1500m champion George Manangoi clocked 3:45.15 to clinch victory in heat one and qualify for Saturday’s finals.

“I am happy to have made it to the finals as I target to represent my country for the first time at the senior level,” said Manangoi.

The duo of Maximila Imali (6.43m) and Millicent Ndoro (6.15m) earned the qualification in the women’s long jump after eclipsing the required 6.15m.

Two athletes finishing first in each event will earn automatic tickets while the third athlete to represent Kenya will be picked by AK selection panel.

Sports and Heritage Cabinet Secretary Ambassador Amina Mohammed and the ministry’s principal secretary Kirimi made an appearance at the Stadium where they promised maximum support for the selected team.

The three-day event is used to select atleast 65 athletes to represent Kenya at this year’s African Games to be held in Casablanca, Morocco on August 23 to September 3.