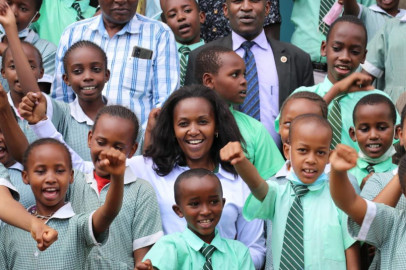 Ministry of Agriculture CAS Anne Nyaga and a group of pupils. PHOTO| COURTESY

Kenya, like the rest of the world, is currently looking for innovative ways to deal with the climate change crisis, considered to be the existential threat to our survival as a planet.

Rising levels of carbon dioxide due to actions, and inactions, of human beings, has led us to the precipice, and we need to all join in the effort to act, and bring about change now.

As a nation, young people have joined the global effort to work collectively and collaboratively with similar-minded nations and organizations to reverse the issues brought on by climate change, particularly through the recently-relaunched 4-K Clubs of Kenya.

This is a ‘smart agriculture for climate change’ initiative that aims to eventually distribute 1 million kitchen garden starter kits (sheds, assorted vegetable packs, and dryers), with 280,000 in the process of being distributed across 21 counties - with over 13,000 households and 4-K Clubs per county being targeted.

In Tharaka-Nithi alone, 1,000 kitchen garden starter kits were given to 4-K Clubs. Using the kits, club members and households can use them to produce safe assorted vegetables for their health and nutrition and boost their food security in a climate-smart way. These are all core pillars of the 4-K Clubs.

At the event, CAS Anne Nyaga stated that by building the capacities of children to learn about agricultural production, and by giving the children a platform to contribute to interventions that mitigate climate change, you give them a chance to start contributing to their future.

Agriculture is highly dependent on the climate, and therefore the stakes for the ministry, and 4-K Clubs, in particular, are very high.

With agriculture as a core economic empowerment activity, the use of smart agriculture for climate change, as well as existing 4-K Club structures, means there already are existing structures within which allocated resources can have an immediate impact.

By design, individual governors are the patrons of 4-K Clubs in their respective counties, and can therefore use these structures to action climate change mitigation measures.

The environmental conservation pillar is a thematic area that the 4-K Clubs is keen to focus on, as it closely relates to agriculture.

At the moment, by working collaboratively with key stakeholders, and by continuing with Training of Trainers at Sub-County level for effective execution of 4-K Clubs, young people are gaining the right knowledge and skills to ensure that they enter and succeed in mitigating the effects of climate change.

President Uhuru Kenyatta officially launched the 4K-(Agricultural) Clubs to be implemented across all schools in the country in June this year following approval by the Cabinet.

The 4-K clubs enabled learners to acquire basic introduction to farming concepts at primary school level. Using school gardens, pupils were taught how to tend to crops and rear animals. These Clubs, however, died off in the late 1990s.