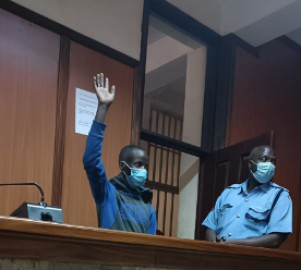 A file photo of Nicholas Mwai (arm raised) who is facing defilement charges in Nyeri County.

A 26-year old man alleged to have defiled a Class 8 pupil in Ngangarithi, Nyeri County was on Thursday freed on a Ksh.500, 000 bond and similar surety.

The man identified as Nicholas Mwai, a line clerk at Naivas’ Nyeri division, appeared before Senior Principal Magistrate James Macharia where he was charged with defiling a 14-year-old minor between January 2 and January 4, 2022.

Mwai had initially asked the court to release him on cash bail but Justice Macharia denied his request citing that the offence was serious and defilement cases have been mushrooming in the region.