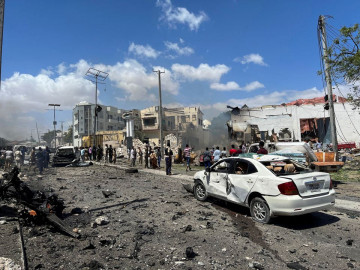 A general view shows the scene of an explosion in the Hamarweyne district of Mogadishu, Somalia, January 12, 2022. PHOTO/COURTESY: Reuters

At least eight people were killed in Somali’s capital Mogadishu on Wednesday morning after a car bomb detonated along Avisione Street.

According to reports, the car bomb, which terror group Al Shabaab has claimed responsibility for, allegedly targeted a United Nations (UN) convoy. The UN mission in Somalia has however since dismissed the claims.

"A car bomb targeted a convoy, including bullet proof cars using Avisione street, we do not who owns the convoy. We carried eight dead people from the scene," Abdikadir Abdirahman, director of an ambulance service, told Reuters.

Multiple reports say that the explosion was so huge that it destroyed most of the buildings and cars along the aforementioned street.

Al-Shabaab has in the past carried out such attacks on both government officials and civilians of the Horn of Africa nation as it seeks to topple the current regime and introduce strict Islamic laws.

In November 2021, the terror group, with ties to Al Qaeda, claimed responsibility for a bombing at Mocaasir Primary School in Mogadishu that left eight people dead and 17 others injured. This came just days after it alleged to have been behind the death of a prominent Somali journalist.

Al Shabaab has been opposing Somalia’s government since 2007 and it was in control of Mogadishu before being driven out by African Union (AU) forces in 2011.