'I would never go through a natural birth again', Betty Kyallo says the experience still torments her 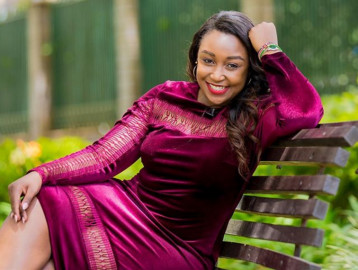 Celebrated media personality Betty Mutei Kyallo has opened up about her pregnancy experience, dwelling on the pain that came with delivering her now 7-year-old daughter, Ivanna.

In a recent episode with Picha Clear Films on the Bun In the The Oven series on YouTube, Betty recounted how she is still tormented by the labor pains.

“I don’t want to discourage any person who is watching this and is expectant. Everybody has her own experience, but for me, I just remember that it was really painful. Even breathing didn’t help. I don’t even know how to explain that pain. It was crazy.”

“By the time I was dilating, I had suffered. When you get to that point, just be ready to go through it. There’s nothing I would have learnt or read that would have actually helped in that situation. It was just pure pain. I don’t think there is a way to describe delivery. They try to prepare you, but it is not easy.”

The mother of one stated that she is not prepared to go through the ordeal again. "Will I give birth naturally again?" she wondered. Betty responded with a resounding 'Definitely no!" adding that if she was to give birth and if God gives her a chance to be a mother to a second child, she would give birth via an epidural.

An epidural is a procedure that injects a local anaesthetic into the space around the spinal nerves of your lower back. This anaesthetic usually blocks the pain from labour contractions and during birth effectively. With an epidural, you can usually move and can push your baby out when you need to.

Noting that other mothers fail to give birth naturally due to health issues, Betty said she was happy and acknowledged that she was lucky to have given birth the natural way.

The former K24 news anchor described the experience as something special while speaking on postpartum shock that comes after delivery for some women, including herself.

"I feel like it was more special for me because the entire process was gradual; not too much excitement at first, but it was a build up."

“I was so happy but at the same time, confused. It depends with the degree of intensity but I feel like many women go through postpartum shock. There is a degree of shock and I went through it. It took me a few days before I started getting acquainted to my baby.”

Betty said the pregnancy came as a surprise three years into working at KTN and in addition, before tying the knot with her now divorced hubby, Dennis Okara.

“I was three years into working at KTN when I knew I was pregnant. I’m not saying it’s a bad thing but it interrupted my career progression at that time.”

"I remember telling Dennis that is what it is and sooner than later, we came to terms about it."

Kyallo urged expectant mothers not to be scared by her experience, adding that there is a new experience for everybody.

“To all mothers who are expecting, don’t let my story scare you. I was also a small girl. There’s a new experience for everybody and I hope you will enjoy it. It is how God wanted us to give birth; to go through the entire process and embrace it rather than feel like you’re being punished. Look at Ivana right now, I am glad I went through that."