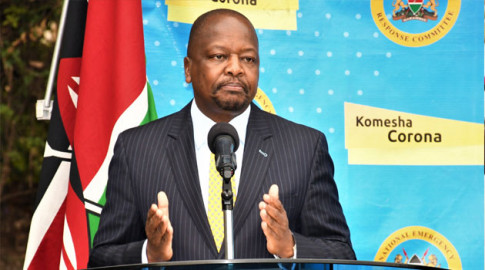 Kenya’s COVID-19 positivity rate now stands at 3.3 percent after 182 people, out of a sample size of 5,477, tested positive for the virus on Wednesday.

Some 173 locals and 9 foreigners are among the infected with the youngest recorded case being that of a 9-year-old child while the oldest is that of a 98-year old senior citizen.

According to Health Cabinet Secretary Mutahi Kagwe, the total positive confirmed cases currently stand at 320,766 with 3, with 200,937 cumulative tests having been conducted so far.

In terms of county distribution, Nairobi, Nakuru, Uasin Gishu, Mombasa and Embu have reported the highest number of positive COVID-19 cases with the regions recording 62, 28, 16, 9 and six cases respectively.

In the period under review, both Kilifi and Siaya counties recorded six cases individually as did Nyamira and Garissa which reported 5 cases correspondingly. 4 persons in Migori and another 4 in Kakamega, also tested positive for the virus while Kirinyaga, Kisii and Kisumu all documented two cases per county.

A total of 230 persons, the Ministry of Health says, have recovered from the virus but three persons have however succumbed to it with cumulative fatalities currently at 5,565.

“Total recoveries now stand at 292,587 of whom 240,441 are from the Home-Based Care and Isolation program, while 52,146 are from various health facilities countrywide,” CS Kagwe said in a statement.

“A total of 653 patients are currently admitted in various health facilities countrywide, while 5,460 are under the Home-Based Isolation and Care program. 27 patients are in the Intensive Care Unit (ICU) and all of them are on ventilatory support.”

The Ministry of Health also noted that as of Tuesday evening, a total of 11,710,636 vaccines had been administered across the country with those fully vaccinated currently at 5,191,409.

“The uptake of the second dose among those who received their first dose was at 61.7 percent  Proportion of adults fully vaccinated was 19.1 percent,” the Health CS added.