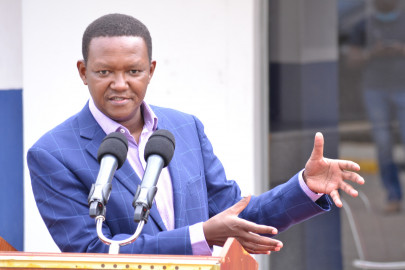 Machakos Governor Alfred Mutua has revealed that he was gifted millions in a briefcase by Former President Mwai Kibaki when he resigned as government spokesperson in 2012.

He says that ex-president Kibaki contributed the amount together with the late First Lady Lucy Kibaki as a show of appreciation, becoming his first campaign donor as he exited government eyeing his current gubernatorial seat.

Governor Mutua adds that he later called Tanzania's ex-president Jakaya Kikwete who similarly gave him a briefcase with money saying it aided in giving him a "final push'.

"Kibaki gave me a briefcase and told me that that was his contribution and that of Lucy Kibaki," he said in an interview with Debunk Media.

The report further stated that Mutua did not reveal how much the money amounted to: "Kibaki became Mutua’s first campaign donor. Mutua won’t say how much Kibaki gave him, but says it was in the millions...Mutua says he called on yet another president, Tanzania’s Jakaya Kikwete, who also gave him a briefcase which Mutua says he used for the final push, like paying agents," read the report.

The Maendeleo Chap Chap party leader says that he shifted his focus into politics after feeling agitated by the poor state of the nation comparing it to the United States where he had spent his education years.

"I always wondered why we were so poor, why our infrastructure was so bad, why we had water problems," posed Mutua.

"I kept on asking, these ministers had always come to the US, why can’t they fix things and change Kenya? I had a burning desire to fix Kenya the way I had seen it done in the US, Australia and other countries I visited," he added.

It is after then when he sought 'real power' and through holding talks with former NSIS Director General Michael Gichangi and Attorney Genral Amos Wako he made his resignation descision final.

"We were having a meeting in Mombasa to discuss the draft constitution in 2010, and to my right was National Security Intelligence Service (NSIS) Director General Michael Gichangi, and to my left was Attorney General Amos Wako," Mutua said.

"When I read the section on devolution, I asked Gichangi, the governor is going to be the next most powerful person after the president, right? Gichangi said yes. I asked Wako the same question. Wako too said yes. It is in that sitting in Mombasa that I decided I was going to be the governor for Machakos, so that I can have power to do the things I had always wanted to do; bring water, build roads and stadia and bring Dubai to Machakos."

The journalist-turned-politician was appointed as the government's spokesperson in 2004 after working as a lecturer in the United Arab Emirates and Daystar University.