Many people trapped after roof collapse at Amazon warehouse near St. Louis 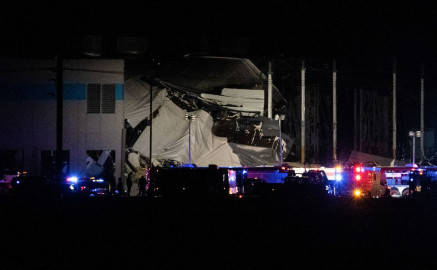 Many people were trapped after a roof partially collapsed at an Amazon.com Inc (AMZN.O) warehouse near St. Louis late on Friday, after tornadoes and strong storms blew through the area, local authorities said.

The Colinsville Emergency Management Agency said it was a "mass casualty incident", adding that multiple people were trapped inside the warehouse in Edwardsville, southern Illinois.

In a posting on Facebook, the agency did not give details, and there was no word yet of how many people had been injured or killed.

An Amazon spokesperson said the company was assessing the situation and damage at the facility.

One woman outside, Sarah Bierman, said she was very worried about her husband, who works at the warehouse.

"I talked to him about eight o'clock tonight, a little before I texted him, and he was returning to the warehouse to drop his van off," she told a reporter.

"And I haven't heard from him since, I just heard through the news and we live in Edwardsville; we lost power. So I decided to come down here to see what was going on, and I had no idea the building looked that bad. And I'm just; I'm worried sick."

"My prayers are with the people of Edwardsville tonight, and I've reached out to the mayor to provide any needed state resources," Illinois Governor JB Pritzker tweeted.

The U.S. National Weather Service had issued tornado warnings on Friday night for areas in several states including Arkansas, Tennessee, Missouri and Illinois.