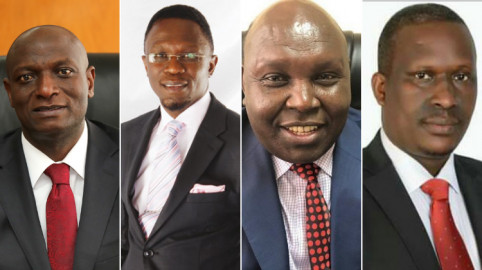 As the clock ticks towards the August 9th General Election, State officials and public servants continue to come out in numbers to declare interest in elective positions up for grabs in the upcoming polls.

A number of Cabinet Secretaries, Principal Secretaries, Chief Administrative Secretaries, Ambassadors as well as heads of parastatals have boldly declared they will be leaving public office to join politics way ahead of the February 9th deadline.

The law requires a public officer who intends to contest an election to resign six months before the date of the election. A case is, however, pending in court challenging the said requirement, with a ruling on the matter set to be delivered on January 24.

While some public officers have already announced their political bids, others are keeping their cards close to their chest as they await the court verdict on the requirement to resign ahead of the elections.

Rift Valley Regional Commissioner George Natembeya set the ball rolling on Wednesday when he announced his resignation from the position, to contest for the Trans Nzoia gubernatorial seat.

Devolution Cabinet Secretary Charles Keter has since thrown his hat into the political ring, expressing intention to vie for Governor’s seat in his home county of Kericho.

Other cabinet members believed to be harbouring political ambitions but are yet to officially declare their intentions include CS John Munyes (Mining and Petroleum), Peter Munya (Agriculture), Simon Chelugui (Labour), and Sicily Kariuki (Water).

Chief of Staff in the Office of the President, Nzioka Waita is seeking to be the next Governor for Machakos County.

Foreign Affairs CAS Ababu Namwamba, who has since endorsed Deputy President William Ruto, is yet to declare the seat he will be vying for in the 2022 elections

East Africa Community CAS Ken Obura is seeking to be next Governor for Kisumu County.

Water and Irrigation PS Joseph Irungu is seeking to be the next governor for Murang’a County.

Prof Hamadi Boga, who is a PS in the Agriculture Ministry is also reported to be in the political race in Kwale County.

Kenya Ambassador to Namibia Benjamin Langat is gunning up for the Kericho gubernatorial race.

Kiema Kilonzo (Uganda) is eyeing the Kitui governorship while Mohammed Shidiye (Botswana) is seeking to be the next MP for Lagdera constituency.

Several heads of parastatals and government agencies are also in the 2022 political race and are expected to leave office next month. Among them is former Police Spokesman Charles Owino who has thrown his hat in the race for Siaya governorship.