Amos Kimunya says UDA allies under orders to cause chaos in parliament: 'They fear their master' 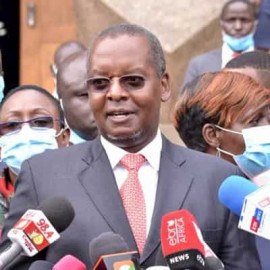 Amos Kimunya, the majority leader of the National Assembly, has slammed Deputy President William Ruto's UDA camp, accusing them of being key organizers of the late-December parliamentary heckling over the political parties amendment bill debate.

According to Kimunya, the UDA party's allies are receiving orders from 'their master,' referring to DP Ruto, to create chaos in parliament in order to effectively oppose the bill's passage.

On Tuesday, Kimunya told Citizen TV that the UDA wing is under orders and that if they do not follow them, they will face consequences. He also chastised DP Ruto for calling him a conman, claiming that he could not be the bill's sponsor while harboring nefarious intentions.

"We know, from talking to them, that they fear that they are being watched not just by their master (DP Ruto) but also by their ground.  If you don't support your master who also opposed the bill and its on record, saying this bill is being brought by conmen," said Kimunya.

The lawmaker added that in his bid to martial support for the bill to be passed to law by February this year, there is still thick smoke between the bill proposers and the opposers even as a 3-day special sitting commences on Wednesday to conclude the debate on the contentious Bill.

The special sitting in December was marred by chaos, name-calling, and violence, forcing Christopher Omulele, the day's speaker, to call a 15-minute recess.

Ultimately, Minority Leader John Mbadi was ejected from the house for five days amid accusations of injuring Sigowet Soin MP Bernard Kipsengeret on the face.

The House had in the end only considered three clauses out of 27 in the amendments.