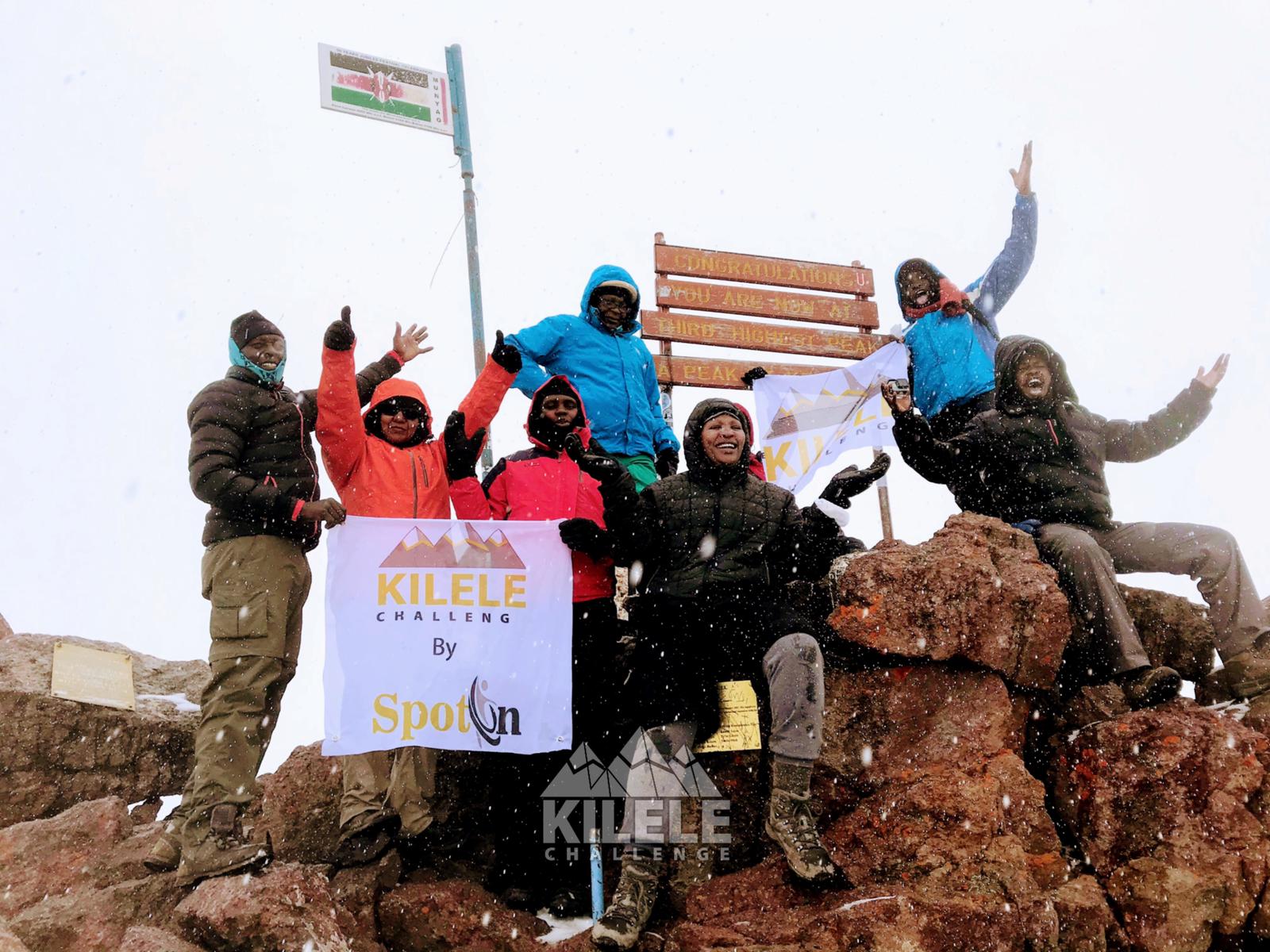 By Patience Nyange and Esther Kiragu Benda Kithaka is a health advocate passionate about cervical cancer elimination and addressing stigma through lived experiences to inspire change. “As a wife and mother of three amazing souls, I uphold that health is the most valid form of wealth, yet most humans are battling lifestyle diseases that could have been prevented. Growing up, the thought of blood made me squirm. I was terrified of needles (I still am). So a career in medicine was out. Instead, I desired to be a lawyer, to advocate for women’s rights and justice; and address social injustices such as gender violence and Female Genital Mutilation (FGM). I recall with admiration when I first visited my aunty, a lawyer in Nairobi. I admired her flashy car and lifestyle. Listening to her talk about her profession, I was motivated to defend the rights of others. However, my Math score barred me from pursuing law, so I opted for political science with the plan to further get into International Law. But, the tide of life will always throw surprises at us, and I wasn’t spared. My dad died, and I was thrust into the role of co-parenting with my mom to help fend for our family. Those moments though callous, instilled leadership and responsibility in my life long journey. I began my career as a field interviewer in 2000 and advanced to a research executive in six years, travelling widely across Africa. Later, I went into mainstream marketing, which involved five years of innovations in reaching customers’ hearts, starting in Keringet Water, then to Toyota Kenya. 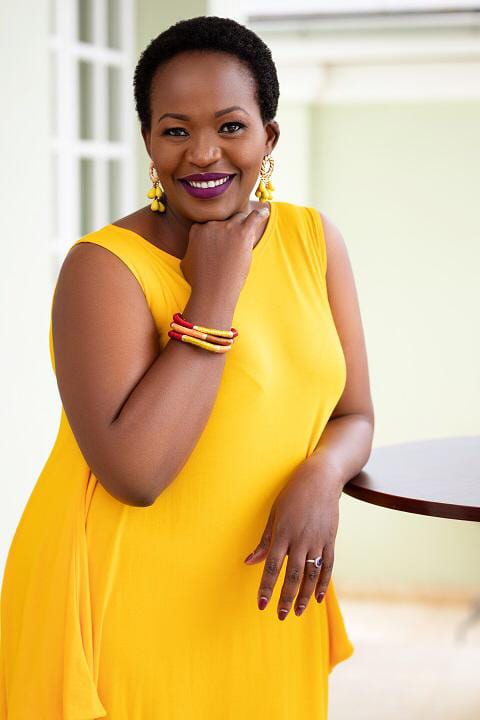 I was Head of Marketing at Toyota Kenya when the Global Toyota Corolla recall happened. Kenya was the only country that continued to sell Toyota Corolla during the recall. My team and I excelled in managing the crisis communications and reclaiming customers trust. As the tide of life would turn just after this experience, my sister was informed that she had cervical cancer. We learnt later that it was a pre-cancer of the cervix. Without chemotherapy, radiotherapy or major surgery, she was treated, recovered, and later got a baby. This was surprising because all along, cancer meant death sentence for me! It aroused my curiosity to read further on health communications. I convinced myself it was possible to get more women to enjoy better health outcomes. I felt compelled to take up health advocacy. During the same period, I was nursing a sickly toddler, and my experience with the health care system in the country left me yearning for more. The opportunity presented itself when I met three women who felt the same way, and together we co-founded Women4Cancer in 2012. Women4Cancer aims to raise public awareness of the benefits of early testing, and facilitate early detection and treatment, to reduce the prevalence of cervical cancer. I served in the organisation for seven years as a volunteer building new networks and gaining the knowledge and skill to excel in my next venture.” 1. You are now the founder of Kilele challenge. Talk to us about it: what motivated you, and what are some of the initiatives/projects you have been running? 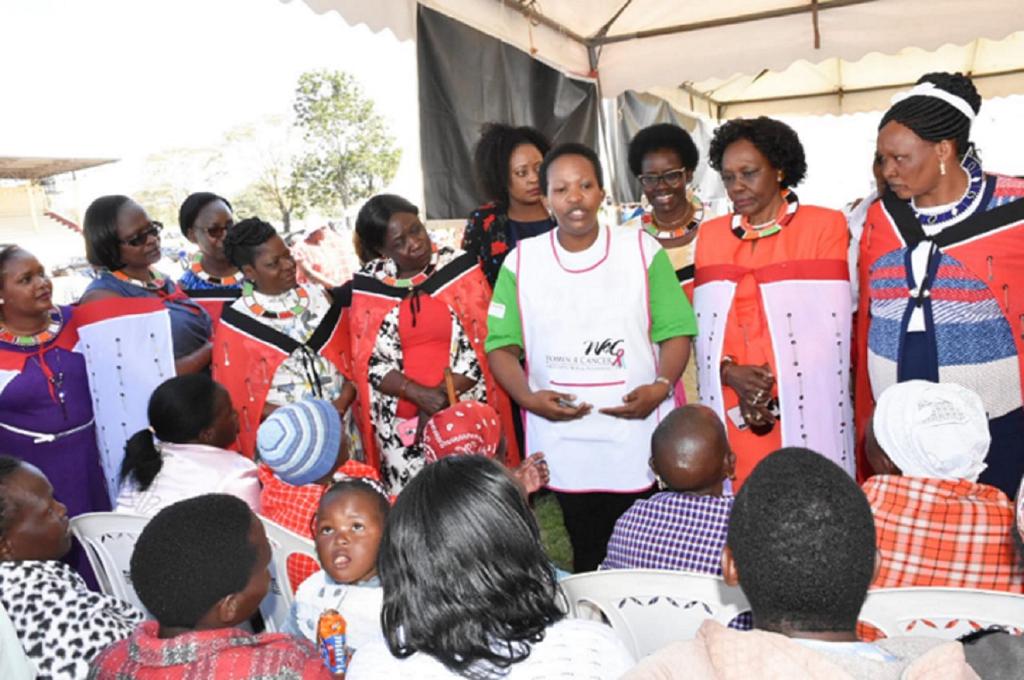 KILELE is the Swahili word for Summit – born from a personal desire to find my utmost purpose in advocacy while inspiring others to live their best life now.

In 2019, after the launch of the HPV Vaccine, I was grappling with depression; having witnessed firsthand health inequities:
• Cancer is expensive and leaves families impoverished.
• Some treatments have major side effects.
• Stigma in survivorship.
• Women cancer survivors’ vulnerabilities – some lose jobs, husbands, and body organs, with lasting adverse effects.
• There is the fear of recurrence, more expenses, and higher risks of death.

My friend Rose, a formidable advocate, spent five years advocating for the HPV Vaccine and just four months before its introduction, she died of a cervical cancer recurrence. I was devastated. We realized that, for those who survive, we must focus on the quality of life; hence KILELE was born. Lasting change requires ownership, so KILELE Health is committed to meaningfully engage cancer survivors, to craft stories of their lived experiences and use these to inspire change in communities; while advocating for favourable policies. 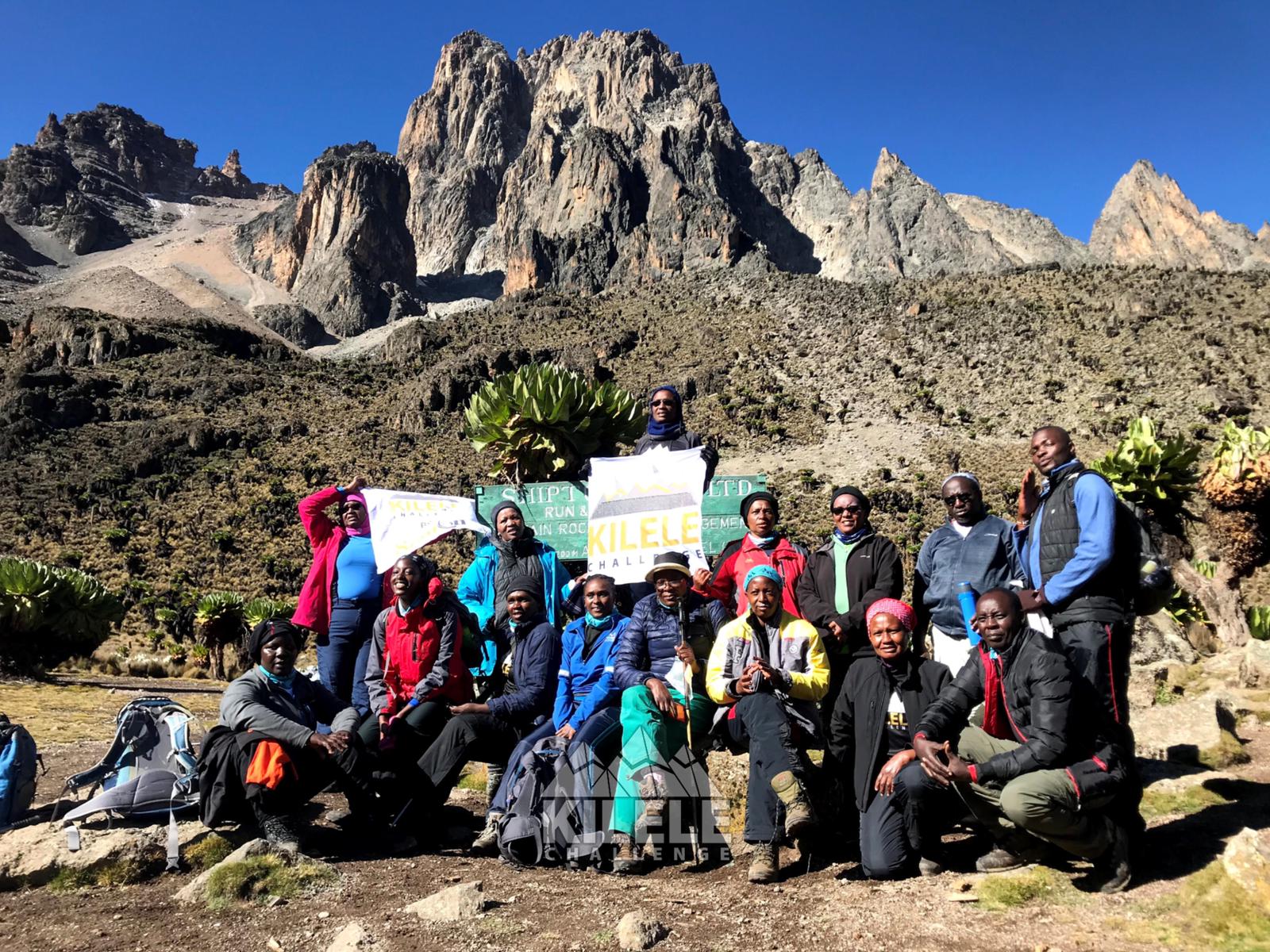 Amazingly, last year, amidst the Covid-19 pandemic, we climbed Mt. Kenya with 12 cancer survivors and caregivers. It was empowering to see these survivors overcome personal and societal barriers. All 12 reached Shiptons, and 8 summited Lenana Point with no prior experience in hiking. Preparations included hiking tough trails such as Elephant Hill to build resilience. We trained on Story Telling for Impact; and they use this skill to educate others about cancer. We also hosted a virtual Health Symposium attended by participants from 25 countries to shed light on Cancer Survivorship and the challenges that need to be addressed. And we are doing it all again. KILELE Challenge is now an annual survivorship engagement platform. We are also focused on research, precisely on the quality of life, to inform policy decisions.

2. You are a member of various global, regional and national technical working groups in advocacy and technical advisory role. You also co-chair the #STOPCervicalCancer Initiative. Please tell us more about some of the successful outcomes borne from your efforts in these groups and initiatives.

Technical Working Groups (TWGs) offer platforms to join hands with other experts and design solutions to cancer control. Some milestones include:
• Co-chaired Prevention Pillar for writing the National Cancer Control Strategy 2017–2022; used in decision-making at National Cancer Control Programme (NCCP) in Ministry of Health.
• Supported by the American Cancer Society, we spearheaded the formation of the STOP Cervical Cancer Initiative, a committee within NCCP.
• In January 2019, championed the development of the 1st National Cervical Cancer Elimination Week; now an annual advocacy platform within MoH.
• On the National Vaccines and Immunization Programme Advocacy Communications and Social Mobilisation (NVIP-ACSM) team, I was involved in the introduction of the HPV Vaccine. 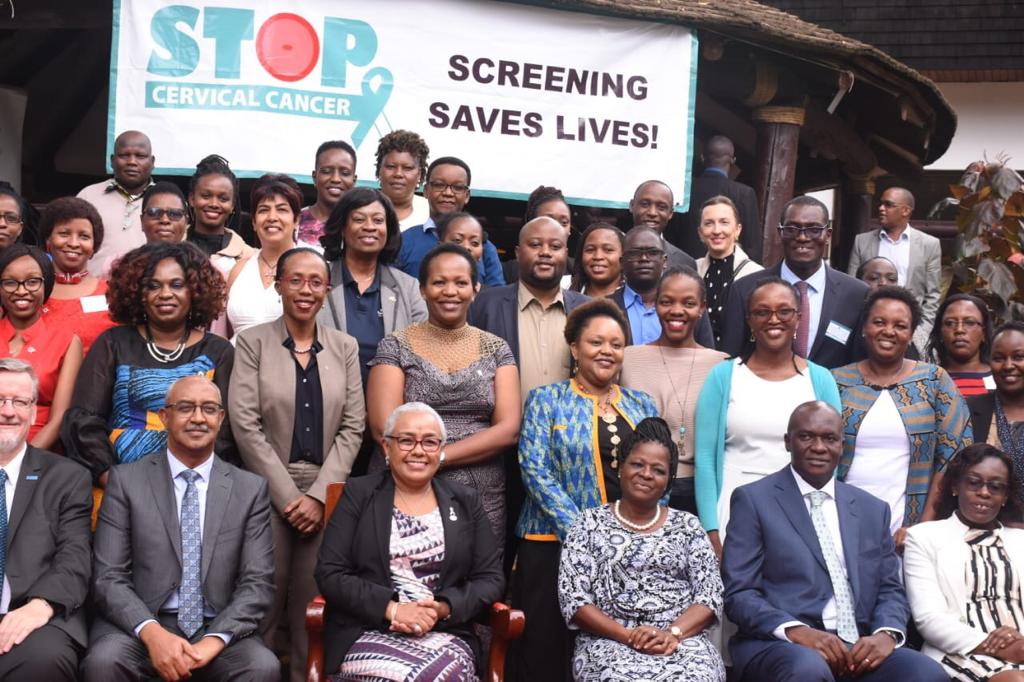 Globally, I represent the voice of the Patient from Low and Middle-Income Countries (LMICs). In May 2019, supported by Union for International Cancer Control (UICC). I joined the Experts Team that discussed the Afro Region input into WHO Global Strategy for Cervical Cancer Elimination. I’m a patients representative on the American Society of Clinical Oncologists (ASCO) Resource Stratified Guidelines TWG. We look at cancer control guidelines and give input on ways to make them practical for LMICs. Often, I’m a panellist, even at the global platforms speaking on advocacy for cancer control in LMICs. 3. For your tremendous efforts in cancer advocacy, you have received numerous awards locally and internationally. Which are these awards and tell us what they mean to you and to people who are battling cancer, especially in Kenya. 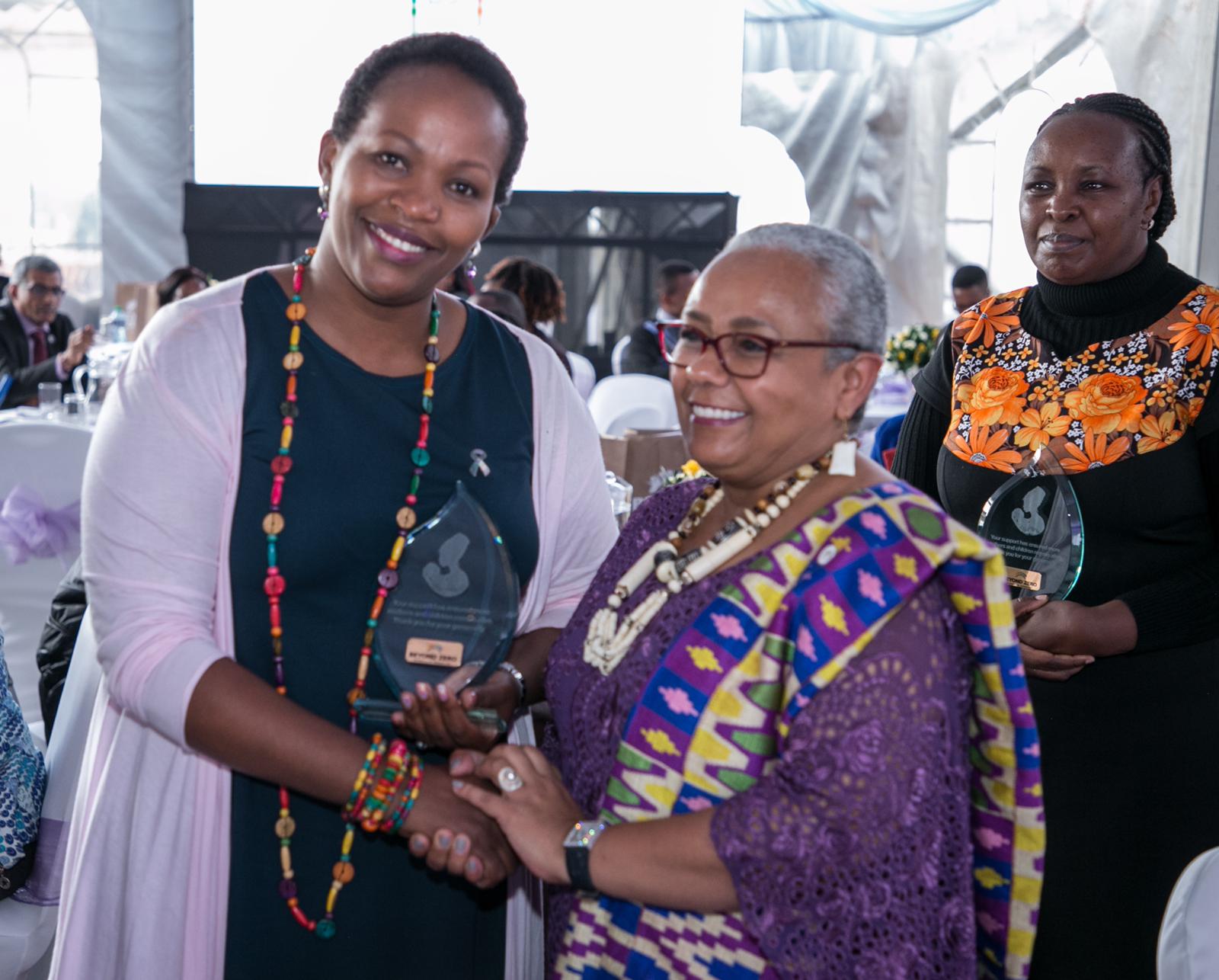 • Cancer Ambassador, Year 2016 by Eddah’s Hope. The award came at a time when I was tired and wanted to end the six years of volunteering. The award showed that Kenyans believed in me, so I stayed and amplified my advocacy.
• The Selma Morris Memorial Travel Award 2017 by the American Association of Cancer Education (AACE) led to a trip to the USA. I visited World-Class Cancer Centers. The experience, what I saw, and the vision it created was mind-blowing!
• WE CAN Advocacy Award 2017. It had a small monetary award. We used it to host County First Ladies to a breakfast in November 2017, signed an MOU in January 2018; and CFLA formally took up Cancer Advocacy in Kenya. Today, from this small seed, we have EMPOWER Cancer Clinics in 8 Counties. Plans are underway to grow the numbers.
• IGCS Distinguished Advocacy Award 2019. Until then, I had never heard of the International Gynecologic Cancers Society. It was humbling to have our footprint and my consistency being recognised globally.
• Zuri Awards Health Category Nominee 2021. Coming so soon after establishing KILELE, it’s an affirmation of the gap we fill.

4. What are some of the life lessons you have learnt that can be beneficial for young women aspiring to go up the ladder, especially in the health industry? 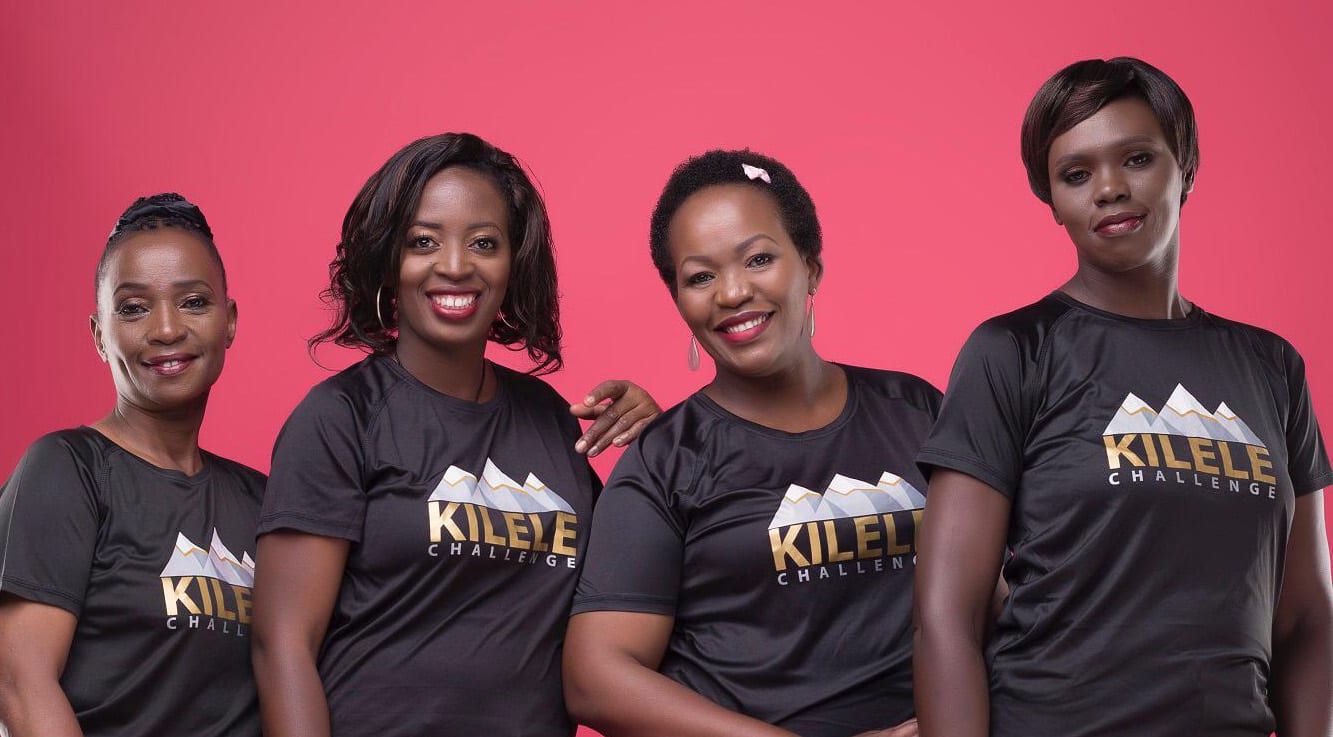 My 3C model:
• Be Curious – probe beyond common knowledge to discover the core issue; and craft solutions. We have so many layers to peel off on the onion called women’s health. A diagnosis with clinical depression for a woman in Kenya is very different from someone in the USA. Their realities are worlds apart. Similarly, therapy will work differently on each. We need solutions that take into account local environments.
• Be Coachable (teachable). Become a sponge for knowledge. A sponge in a dirty pond will sieve the clear water and leave out the dirt. Sometimes you will be selected to fill a gender quota. Learn as much you can so that when your time comes to be present, you will REPRESENT all women. Never allow your lack of knowledge to be the reason they dismiss your arguments.

• Be Consistent. Deliver quality thoughts, words and actions. Identify what you stand for, and stand up for it. We cannot yet read minds, so people know where you stand only if you speak. Find your voice and speak truth to power. 5. If you were to choose the two most important values that shape the way you work and live, what would they be and why? 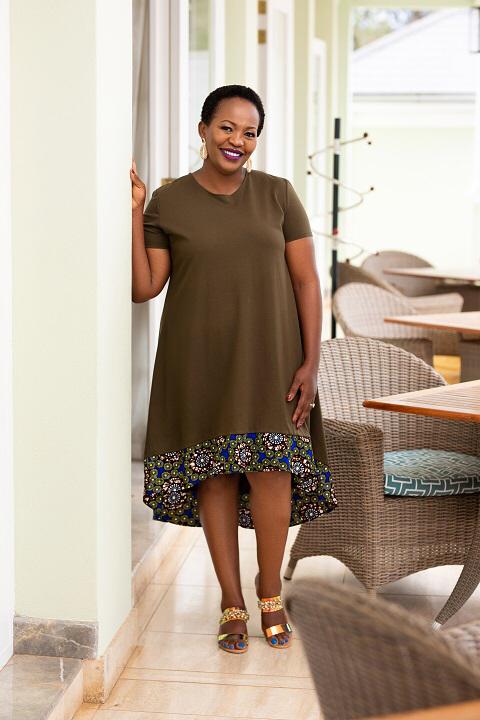 • Love – Love of God, self and others. Advocacy helps me extend the compassion I feel towards that one person whose suffering I have encountered to envisage solutions that will positively impact many more.
• Honesty – I maintain integrity in my dealings, recognising that I am successful because people trust my intentions and my words match my actions.

6. We reached out to a few people who know Benda and asked them to describe her. They had this to say. • She is a strategic thinker: I have seen her research on an issue, invite partners, negotiate and build commitment to results, all the time putting her points across calmly and respectfully. (Remarks from a colleague) • She is remarkably resilient: When you interact with Benda, she instantly brings joy and sunshine to the gloom. I have seen her weather the worst, hiding pain behind a smile. Maybe because she knows too well that challenges are fleeting, but the impact of our encounters leaves lasting marks. (Remarks from her best friend) • She is eccentric: Well, mum is a nonconformist who uses creativity to solve life’s problems. I am glad I call her my mother. (Remarks from her daughter) 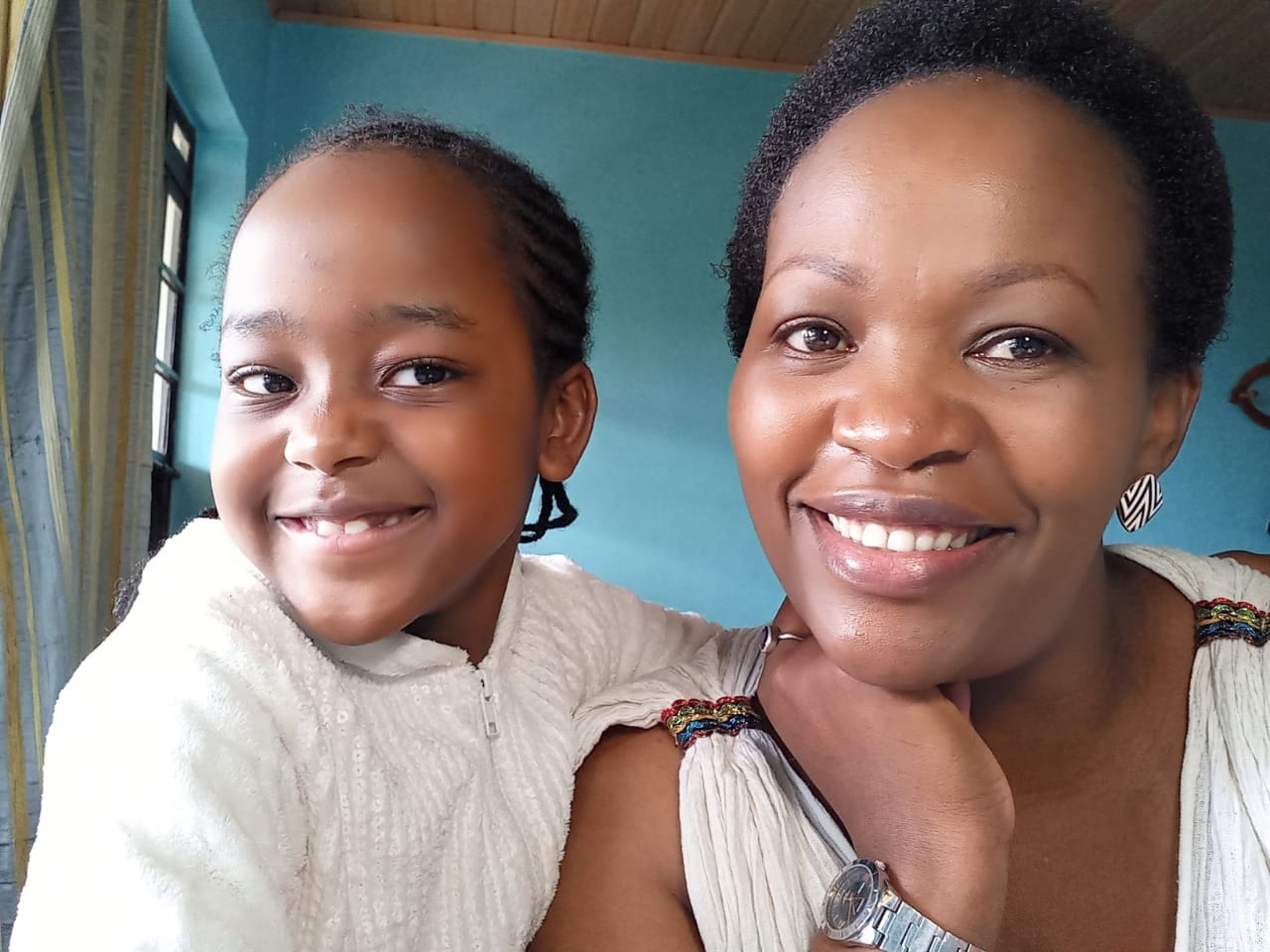 7. If you were given a chance to create a new world for the generation behind you, what would you wish for?

• A world where we control modifiable risk factors through simple interventions – eat right, move more, rest enough, avoid the use of alcohol and cigarettes and guard your thoughts.
• A world that yearns for knowledge- Environmental risk factors can be addressed if we put people before profits. We have vaccines and health interventions for disease-causing vectors, and we could reverse adverse human effects on our environment, e.g. pollution and environmental degradation.
• Covid-19 has presented a golden opportunity for us to press the health equity reset button. With an advocacy for best practice, political goodwill and ownership for follow through on critical actions, it is now possible. We all have a duty towards health equity.

Esther is a writer, editor, and communication professional in Kenya while Patience Nyange is a Chevening Scholar with a Masters Degree in International Public Relations and Global Communication Management from Cardiff University. Prior to joining Cardiff University, Patience served as an Assistant Director at the Kenya National Commission on Human Rights (KNCHR).