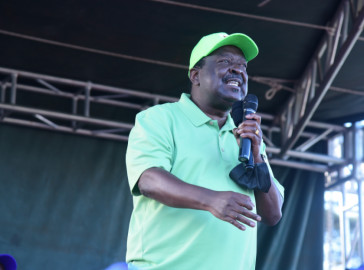 ANC Party leader Musalia Mudavadi on Friday came out to explain why his former One Kenya Alliance (OKA) principals walked out of his much-hyped conference at the Bomas of Kenya on Sunday.

Mudavadi claimed the OKA principals are cowards and should open up to Kenyans that they were afraid of President Uhuru Kenyatta.

He insinuated that the walkout staged by Kalonzo Musyoka, Gideon Moi and Cyrus Jirongo was fueled by the fact that they have been seeking President Kenyatta's endorsement and thus did not want to shed a bad light.

The ANC leader was speaking during a joint rally with Deputy President William Ruto and Ford Kenya party leader Moses Wetangula in Bungoma where they drummed up support for their newly-formed alliance.

“Waliposkia DP anakuja pale Bomas, jamaa walitoroka mbio wakisema staki kupatikana hapa nikipigwa picha itakua bad for optics. No, It is not bad for optics, it is not bad being taken a photograph with another Kenyan whether it is the DP or anyone else,“ Musalia said.

Mudavadi went forth to tell off the so-called deep state saying that they were undermining his newly formed unity with Deputy President William Ruto.

"Nobody should choose for us friends. We must have freedom of association, expression and freedom to choose the leaders we want for this country," said the ANC leader.

Mudavadi further went ahead to indirectly accuse the head of state of imposing leaders on Kenyans.

“I will spare his name a very senior man in this government once told me; We cannot leave the government to someone who is not pedigree. If we have pedigree in the country then who are the mongrels,” he said.

Musalia exuded confidence that their new alliance with DP would emerge victorious, urging Kenyans to unite together against divisive leaders and intimidating government.

“We are making a coalition for all Kenyans. It must be truly a rainbow coalition that captures the breadth and width of the Kenyan nation. We want it to start for freedom, we want to stand for democracy, justice and economy ndio mueke pesa mfukoni,” Musalia stated.