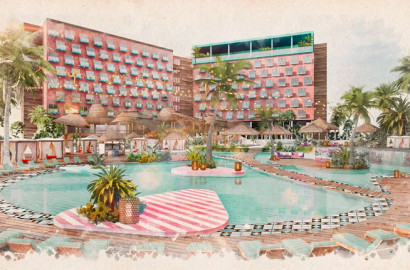 Pharrell Williams has announced a new lifestyle and design-forward project with Miami-based hospitality and nightlife entrepreneur David Grutman: Somewhere Else, a new resort that will be part of Atlantis Paradise Island, the world-famous Bahamas destination known for its coral-pink towers and marine attractions.

Slated to open in January of 2024, Somewhere Else will house approximately 400 rooms and suites, multiple restaurants and bars, and bungalows with recording studios — with an emphasis on indoor-outdoor flows with lush, freeform landscaping.

Williams, in a joint exclusive interview with Grutman, said that the concept of "tropical modernism" is being reimagined for this new space, hinting at a more contemporary feel. "Often, when talking about tropical aesthetics, there's this harkening back to another time," Williams said. "It's like, 'man, let's let that time be.' We're going for the future here."

With a design team led by Shawn Sullivan, a partner at David Rockwell's The Rockwell Group, Somewhere Else promises a languid and fluid visual line -- from cascading pools that draw the eye seaward to polychrome room concepts with color accents found in dashes throughout the property. Sullivan, speaking over a call from New York, also noted that "when you pull up, you'll arrive through a densely landscaped garden, and that garden sort of continues under and through the building."

Somewhere Else will be anchored by a flamingo pink-trimmed building which, until now, has been known as The Beach. It was the first hotel built on Atlantis Paradise Island, and it was designed by the late Morris Lapidus. Lapidus was a popular mid-century figure, and a leader of the exuberant "Miami-modern" style.

As it happens, he designed the Fontainebleau Hotel in Miami Beach, home to the Grutman-owned nightclub LIV (there's a noteworthy circularity in this resort for Williams, too: he grew up in a housing project of the same name. "I've gone from Atlantis to Atlantis," he said, smiling).

The Beach sits on a quiet corner of Atlantis Paradise Island, and is getting a head-to-toe redo.

"What we've done as an approach is to strip away a lot of bulk from the architecture," Sullivan explained. "We're opening up the structure to the landscape and to the sea. Warm-weather resorts also often have ample natural elements, but they're usually very controlled. We're excited to let nature pervade the space."

Sullivan also added that the team is thinking about art and sculpture not as something decorative, but as entities that may — possibly — be built into the architecture of the space. Considering Williams and Grutman's friend group, which includes the artists JR and Speto, it's an interesting prospect to consider.

Somewhere Else is the third joint hospitality endeavor between 13-time Grammy winner Williams and Groot Hospitality founder Grutman; they are also partners on the Miami-based restaurant Swan, and the The Goodtime Hotel, which opened to buzzy fanfare in 2021 (Kim Kardashian and David and Victoria Beckham were in attendance).

As of now, the Bahamas project is the pair's largest and most complex undertaking to date, and it's the first time the Atlantis megaresort, which is owned by Brookfield Properties, has broken from extending its branding to a hotel within its vicinity. Williams and Grutman will maintain 100% ownership of Somewhere Else's intellectual property and have been given carte blanche on how to execute it.

"We want to do this one differently than what you're used to from Pharrell and I," Grutman said, (Both of their current venues, Swan and The Goodtime Hotel, are tropical in feel -- yet they retain notable throwback elements and airs of kitsch and nostalgia.)

"We're really going for an emphasis on the outdoors, and experiences that you can have on the grounds of the property, whether in a fun-filled sense or in finding a quiet corner to relax," he continued. "What we're not going to have is a nightclub, for example."

Somewhere Else will not fall into the more affordable range of resort pricing, but it will also not be priced in the highest luxury bracket. In fact, according to Sullivan, the resort's team is reconsidering what "luxury" really means today.

"The word luxury is evolving, and it's an interesting expression, because from a development perspective it used to mean you counted the number of fixtures, or the square footage, or the marble specs," Sullivan said. "We think the truest luxury now is in what one experiences. Both of these guys are so well-versed in design, but between David's ability to create high-energy and memorable places and Pharrell's focus on wellness and mindfulness, it's a perfect balance. And, though I say this cautiously, I think we're doing something that's never been done."