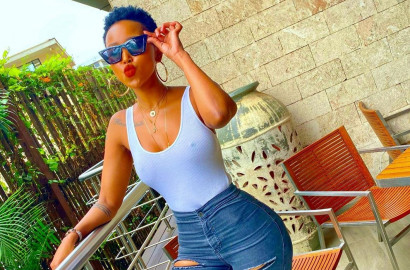 Alhuda Njoroge, AKA Huddah Monroe, a Kenyan socialite and entrepreneur, now claims that celebrities use donations as a way to simply lie.

On Thursday, the socialite took to Instagram to share two screen captures of Nigerian celebs Davido, a musician, and Femi Otedola, a businessman, who were recently rumored to have contributed money to orphans.

Huddah reposted a screenshot that said ‘Davido donates 250 million raised for his birthday to orphanages across Nigeria’ to which the socialite said it was a big lie.

To another post that said ‘Nigerian energy magnate Femi Otedola donates $14 Million to save the children fund,’ the socialite questioned the fact that no one has seen or heard of the built schools or shelters adding that $14 million (Ksh. 1,573,600,000) is a lot of money.

Huddah wrote “We are yet to see the saved children or schools built, or shelters, maybe there is. I just haven’t heard coz $14 Million is not small change.”

The Socialite, who has never shied away from contentious topics, went on to say that celebrities should first do the act of giving before talking about it, adding that we all lie, but they should at the very least do the bare minimum.

“Donations are a way to just lie..we all lie but just do the bare minimum, show us then talk.” Huddah wrote.

This comes after fans sent Davido, a Nigerian singer, a total of Ksh. 54,645,957 million to celebrate his birthday.

The Nigerian artist responded by posting on social media that all funds contributed to him would be donated to orphanages in Nigeria.