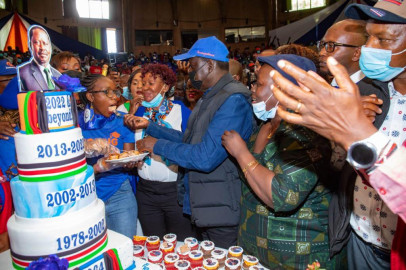 Azimio la Umoja Movement leader Raila Odinga on Friday marked his 77th birthday party in an event held at the Bomas of Kenya in Nairobi on Friday.

A multitude of citizens from all parts of the nation turned up at the convention to share in the joy of the former premier's anniversary.

Youth dominated the event with the popular slogan ‘Vijana na Rao’ being echoed across the arena.

Youth leaders present advocated for the candidacy of Odinga as the next president of Kenya come to the August 9 election.

Sports Chief Administrative Secretary (CAS) Zach Kinuthia, a representative of youth in the country who was the MC at the event, presented the five-stair cake symbolically to show the tenures of leadership in the country since independence.

"1964 to 1978 it represents Mzee Jomo Kenyatta's regime. the second layer run from 1979 to 2001 represents late President Moi. The third layer from 2002 to 2012 represents Kibaki's era and the fifth layer is for our fifth president Raila Odinga," he explained.

Makanjo, a former student leader at Maseno University, dissociated Raila Odinga with dynasty politics instead thanking Odinga for his role in the formation of the Kenyan democracy.

“Life begins at 40, you are not 77, you are actually 37; 77 is a number associated with a higher calling,” Donhold MCA Benson Mutura said.

Matakwei Mayenga who represents the youth in the county caught the attention of the crowd with his boldness and vigour of words as he called upon Odinga to focus campaigns on the grassroots.

Maina Njenga similarly underscored Mayenga's message saying that the Raila campaigns should focus on being dominant at the grassroots and not on the alleged hotel meetings.

At the same time, the youth endorsed Odinga as their preferred presidential candidate terming him as an 'economic liberator' of Kenya.

Odinga in his speech focused on reassuring Kenyans of his economic plans for the country focusing on the 10 principles of his agenda.

"We only need the will-power to implement the vision 2030 and improve and move this Kenya to middle-income status," Odinga noted.

At the same time, he launched a thinly-veiled attack at Deputy President William Ruto accusing him of corruption that he said continues to injure the country economically.