Kandie fired up for marathon debut in New York 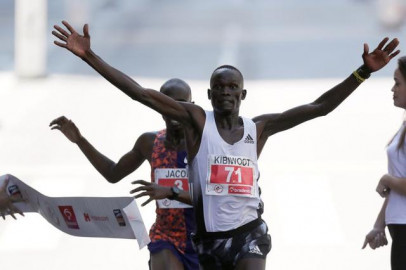 Half marathon world record holder Kibiwott Kandie says he is excited to make his full marathon debut when he competes at the New York City Marathon on Sunday.

Kandie, whose specialty is the half marathon, said he is prepared to tackle the hilly course at the New York which is regarded as one of the toughest circuits in the world.

“I have prepared well and I hope to do my best. Although it will be my debut in a full marathon, I am relaxed and ready for Sunday” Kandie said.

The Kenyan who holds a world record of 57 minutes and 32 seconds over 21km said he had to change his training regime as he made forays to the 42km race.

“I have had to increase my long runs from 30km to 40km and I think I am well equipped to compete in a full marathon,” said Kandie.

“I had an option to compete in three marathons and I chose New York since I had adequate time to prepare for. Similarly, this is a big race and I could not turn down the invite,” Kandie responded when queried on why he chose New York for his marathon debut.

Kandie who has been battling a nagging knee injury disclosed that he is yet to regain full fitness.

“At the moment I can say I am 80-85 per cent fit however as an athlete we are used to challenges when it comes to injuries and I am going to do my best notwithstanding,” he said.

Kandie will be joined by compatriots Albert Korir and Augustine Choge.

Ethiopia’s Kenenisa Bekele will be hoping to bounce back from Berlin Marathon disappointment in September where he finished third and also fell short of the world record.

“It is my first time competing in New York. I don’t know how hard it is, also there will be no pacemakers and therefore I will just focus on a tactical race and see how it will be,” said Bekele.