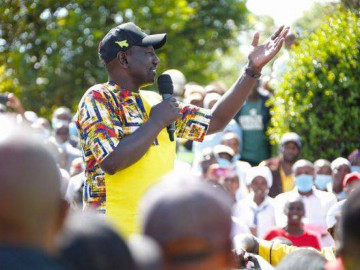 Deputy President William Ruto has slammed his political opponents and the so-called "deep state," claiming that he will not be defeated in the August elections.

Ruto chastised his opponents while speaking to supporters in Isibania, Kuria West, Migori County, saying their plans to steal votes would be futile.

Ruto claimed that his opponents are simply riding on talk of a fictitious 'Deep State,' and that he is confident that they will soon spin the narrative and blame him for something new.

Kiharu MP Ndindi Nyoro, who spoke alongside Ruto, slammed the Kenyan government for arresting Meru Senator Mithika Linturi in the early hours of Sunday morning claiming that the law should be applied equally to all Kenyans.

Other politicians, including ODM leader Raila Odinga, have expressed similar sentiments, according to him, and authorities have taken no action.

"The law must always apply equally to all Kenyans. Jana nilikua kule Eldoret na kila aliyeongea hapo aliongea maneno yake ya kisiasa na maneno ambayo itaunganisha wakenya wote. But the government took one of us and tried to misinterpret the words he said. The same words he used are the same Kimemia used earlier and action has not been taken on Kimemia. I have also seen the opposition leader telling people to take guns, sijui ni ya kufanya nini kule Nyandarua siku ingine na hakuna kitu alifanyiwa," he said.

He also claimed that the government is funding small political parties in an attempt to divide Kenyans and divide them into ethnic groups in order to promote disunity.

"The government of Kenya must stop using the project of balkanizing Kenyans by funding small political parties, by aiding and registering small ethnic parties. We want one nation that will unite all Kenyans".