'OKA is now stronger,' says Kalonzo as he vows to defeat Raila, Ruto in August election 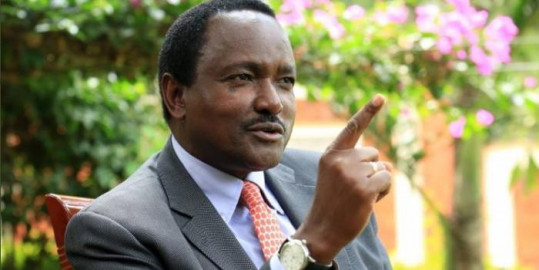 Wiper Party leader Kalonzo Musyoka says his party will knock down all his competitors and scoop a majority of the seats across the Country’s vote-rich regions come August elections.

Addressing residents of Kabati, Kitui County on Thursday, Kalonzo said his party’s magnitude in the General Election should not be underestimated, claiming he has influence from the Mt. Kenya region down to the Coast.

“Whoever jokes about Wiper has no idea about what they are dealing with, this time we are getting over 120 MPs, note that down somewhere,” said Kalonzo, “All of Taita-Taveta and the whole Coast region we will produce over 10 governors. We are not playing like we used to.”

The One Kenya Alliance (OKA) co-principal further stated that with support from fellow co-principal Gideon Moi’s KANU party, he was determined they would succeed the Jubilee government.

“Wiper will produce over 120 MPs and about 2,000 MCAs. If we add that to what KANU will have, we will have power and climb that mountain as they keep wondering,” Kalonzo said.

“No one from Mt. Kenya can fail to give me their vote to go and give it to Raila or Ruto. That is the biggest lie one can ever say,” he added.

He also reiterated that his union with Moi was still strong despite Sunday’s defection of former co-principals Musalia Mudavadi and Moses Wetangula to DP William Ruto’s camp.

“OKA is stronger than ever before and just as bold as we were as we walked out of that place,” he stated.

On his part, Moi vowed that an OKA government would weed out corruption through implementation of stringent anti-graft laws.