Governor Ndiritu Muriithi: 'DP Ruto is the reason why I was denied a Jubilee ticket in 2017' 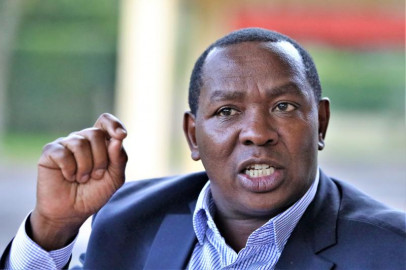 Laikipia Governor Ndiritu Muriithi has spoken about his fallout with Deputy President William Ruto which he says led to him being denied a Jubilee Party ticket in the 2017 elections, consequently contesting as an independent candidate.

Governor Muriithi says that he differed with DP Ruto on the dissolution of the Party of National Unity (PNU) party, led by former President Mwai Kibaki, that saw him get summoned to Karen where the 2017 nominations were managed.

DP Ruto was the then Jubilee nominations manager.

The Laikipia county boss said that he had clearly won the nominations but the Political Parties Tribunal was compromised, saying that they had orders not to allow him to the seat.

"Everyone knows who resides at the Karen office where the 2017 nominations were managed. He demanded to know why I was opposed to the folding of PNU and this is what I told him to his face: 'Look I cannot give you the permission to fold PNU because I don't own the party'...Later we saw some people being photographed saying PNU has been disbanded," he said in an interview with Daily Nation.

"It was evident that I won the nomination, but officials told me that they were told that I should not get the ticket. The Political Parties Disputes Resolution Tribunal also found out that I had won but the ticket was given to my competitor."

His competitor then headed to the Political Parties Tribunal and secured the ticket, forcing Muriithi to vie as an independent candidate.

He boasted about his bravery for running independently saying that he was still the people's preference, more reason to why he was still elected as governor.

"From the pattern of nominations, it was clear that there was a scheme to put in place people who would resist orders. But to people like us who have principles, we could not buy that... I proved them wrong. The people of Laikipia knew who their choice is," he said.

Governor Muriithi is now the chairman of  Raila Odinga's Campaign Board under the Azimio La Umoja movement.