‘It was due to a faulty generator,’ MP Kositany clears the air over campaign vehicle fire 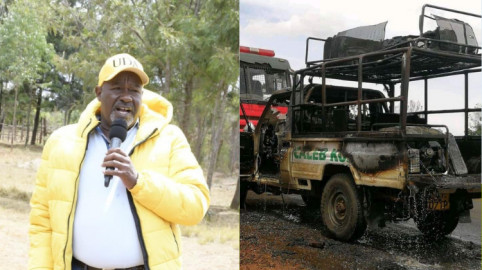 Soy Member of Parliament Caleb Kositany has come out to address a viral video which showed one of his campaign vehicles on fire.

Kositany, in a tweet on Saturday, stated that the fire was as a result of a faulty generator, contrary to social media reports that the vehicle was set ablaze by rowdy supporters of his political opponents.

“My public address vehicle caught fire today, due to a faulty generator,” the Deputy President William Ruto-allied legislator wrote, noting that everyone aboard the pick-up truck is safe.

“Everybody is safe, thanks to the Eldoret airport fire brigade and Uasin Gishu county fire department,” added Kositany.

Social media was awash with the video of the burning vehicle on Saturday, with a section of Kositany’s supporters crying foul over alleged victimization from opponents.

All are seeking a ticket under DP Ruto’s UDA.

Businessman Zedekiah Bundotich, commonly known as Buzeki, is also said to be in the race although he has not declared his party.