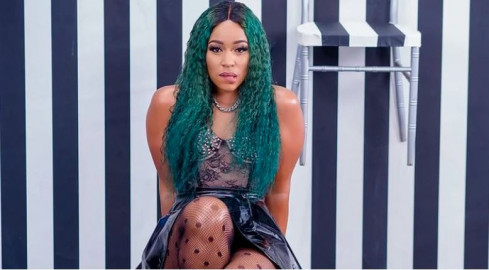 The year 2021 has been an eventful year in the entertainment scene.

One can chalk it up to the fact that for most of the year, Kenyans have been under lockdown owing to the Covid-19 pandemic.

However, the entertainment scene has been a blessing as it has provided laughs and trends to most Kenyans.

Here is a list of the few moments that defined 2021:

Diana Marua AKA Diana B

The Kenyan music industry saw the introduction of a new rapper in town by the name Diana B.

When Gospel musician Bahati unveiled his wife Diana Marua as a rapper, the online community could not resist throwing jabs at her singing voice or lack thereof.

Many saw Diana B's rap career as a joke to the Kenyan music industry while some congratulated her for trying.

Nonetheless, her debut song 'Hatutaachana' saw a rise in numbers in a matter of days, and whether or not people are watching for curiosity or admiration, at the end of the day negative publicity is still publicity.

The video which was released one month ago currently has 1.8 Million views which is an achievement most Kenyan musicians strive to achieve.

The self-proclaimed president of comedy Eric Omondi has been in the headlines for most of 2021.

A comedian who has been mostly endeared in the entertainment industry is now a controversial entertainer.

The comedian who started out as a Churchill show stand-up comedian has unveiled scandals that include: baby mama drama, reality show wife material, fake pregnancy, and last but certainly not least, the fight for Kenyan music airplay.

The fight for Kenyan music airplay has been the most dramatic stunt of the comedian and has got him into trouble with artists such as Sauti Sol, Khaligraph, and it even saw International artists such as Konshens and Zuchu also contributing to the topic.

The topic went viral when the comedian termed the Kenyan entertainment scene as dead and a disgrace, calling musicians 'mere curtain raisers for International acts.'

"The Kenyan Entertainment scene is dead!!! We have lost our Glory. We have become a Cemetry!!! It is utter DISGRACE that our musicians have become mere Curtain raisers for international acts," claimed the comedian.

Most musicians and Kenyans agree with Omondi's sentiments, however, it is in the way the comedian addresses the issues that bring rise to conflict.

A legion of International artists towards the end of 2021

Barely a month after President Kenyatta lifted the dusk-to-dawn curfew, ending the cessation of night movement, concerts in the country were already lined up.

The first International artist after curfew was lifted was Jamaican sensation Etana which was on October 30 and on the same weekend, Omah Lay followed suit with the Pizza and Wine Festival.

The following weekend, Black Coffee performed on Nov 7, thereafter was Nigerian Adenkule Gold, or AG Baby if you like, with his own serving of electricity on November 13.

Jamaican artists Garfield Spence AKA Konshens and Charlie Black are expected to perform in Nairobi on December 31 at the Carnivore Grounds and New Years' Eve Glow fest respectively.

Kenyan rapper Trio Mio has come out as one of the greatest surprises in the music industry in Kenya.

The seventeen-year-old teenager first gained success in 2020 with his hit song 'Cheza kama wewe' and since then his music trajectory has gone up even with juggling music and school.

Because of his mastery of words, Trio has been compared to the fallen Kenyan legend E-sir by the online community.

His greatest achievement of 2021, according to him was getting an invite to perform at ODM leader Raila Odinga's Azimio la Umoja rally on December 10.

Terence Creative born Lawrence Macharia is arguably the most popular content creator at the moment.

His fame and success rose even higher after his three-part 'wash wash' series which he released on Youtube on September 3.

Most Kenyans even adopted the use of the term 'Legit business' a word the creator uses in the three-part series.

In the series, Terence highlights the money laundering business in Kenya and is loosely based on Terence's true-life story.

In the series, Terence plays the character of 'Papa Fred' a Congolese businessman, with flashy jewellery and clothes. 'Papa Fred' has a Congolese accent and pretends to have a lot of business deals with people from all over the world while in the process he is able to swindle people out of millions.

Kenyan RnB Musician Nikita Kering rose to fame when she released 'Tragedy' in 2019.

Kering's biggest hit at the moment is 'Ex' which has garnered 3.8 Million views on Youtube.

2021 has been the most-awarding year for Kering as she bagged two Afrima awards beating Adekunle Gold and Wizkid in the category of Best Artist, duo, or group in African Rnb & Soul.

The 19-year-old singer won in the categories of Best Artiste RnB and Soul for her hit song ‘Ex’ and overall Best Female Artiste in East Africa.